Calling it ‘a piece of art,’ Cebuano prints new quarantine pass on a shirt 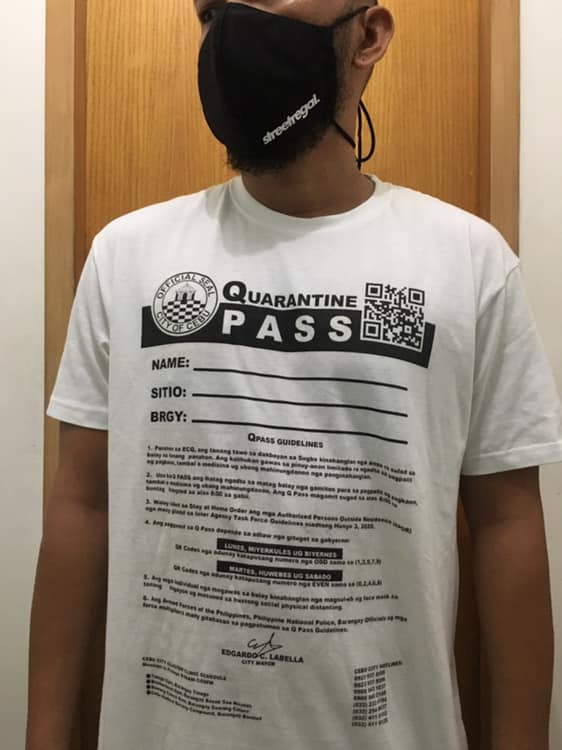 A Qpass as a shirt design? Not a bad idea. | Contributed photo.

CEBU CITY, Philippines— Netizens have been creating so much buzz over the newly issued quarantine passes with respective QR codes in Cebu City.

For one, a lot are talking about its size, which is way bigger than the recent passes that were suspended last June 23, 2020.

But while some are making fun of the new passes, RR “Pormz” Prominal, a 30-year-old t-shirt printing shop owner from barangay Ramos, had something else in mind.

He decided to make the new quarantine pass a design for a shirt. Prominal decided to print the Qpass on a white shirt last Saturday, June 27, 2020.

“I saw the sample Qpass on social media and thought it was quite iconic,” he said. “A piece of art actually,” he added.

So this is what pushed him to print it on using his direct-to-garment printing machine.

” [I wanted] to preserve it [for] the future when all this is done,” said Prominal.

Prominal made it clear, though, that he is doing this not to make fun of the Qpass. He clarified that he did this for fashion and remembrance purposes.

“I don’t intend to confuse Cebuanos nga mao ni gamiton as Qpass. Just made this piece for art and fashion. Also, nindot sad gyud ang design, a simple reminder for us to follow city rules and regulations,” he said.

Prominal wanted to show his Qpass shirt design so he uploaded it on his Facebook account. Since its posting,  the photo has been shared 2,600 times with 1,600 reactions.

As expected, in the comment section, netizens were quick to jump into the mayhem and commented their shirt sizes, showing interest on the unique design.

But sorry guys, Prominal isn’t selling the shirt. Like what he said, he only printed one for fashion and remembrance purposes. /bmjo