MANDAUE CITY, Cebu –  A 55-year-old resident of Barangay San Roque was the latest fatality of the coronavirus disease in Liloan town.

The patient, who was exposed to relatives and neighbors who were working in the cities of Lapu-Lapu and Cebu, was also hypertensive and diagnosed with a post-Pulmonary Tuberculosis.

She died on Saturday, July 11, while admitted at the Cebu Provincial Hospital in Danao City, said an advisory that was posted on this northern Cebu town’s Facebook page.

In compliance with Department of Health regulations, the town’s latest COVID-19 fatality was also buried on the same day.

Also on Saturday, Liloan town also logged three new cases of the infection bringing its active cases to a total of 74 with 33 recoveries and eight deaths. 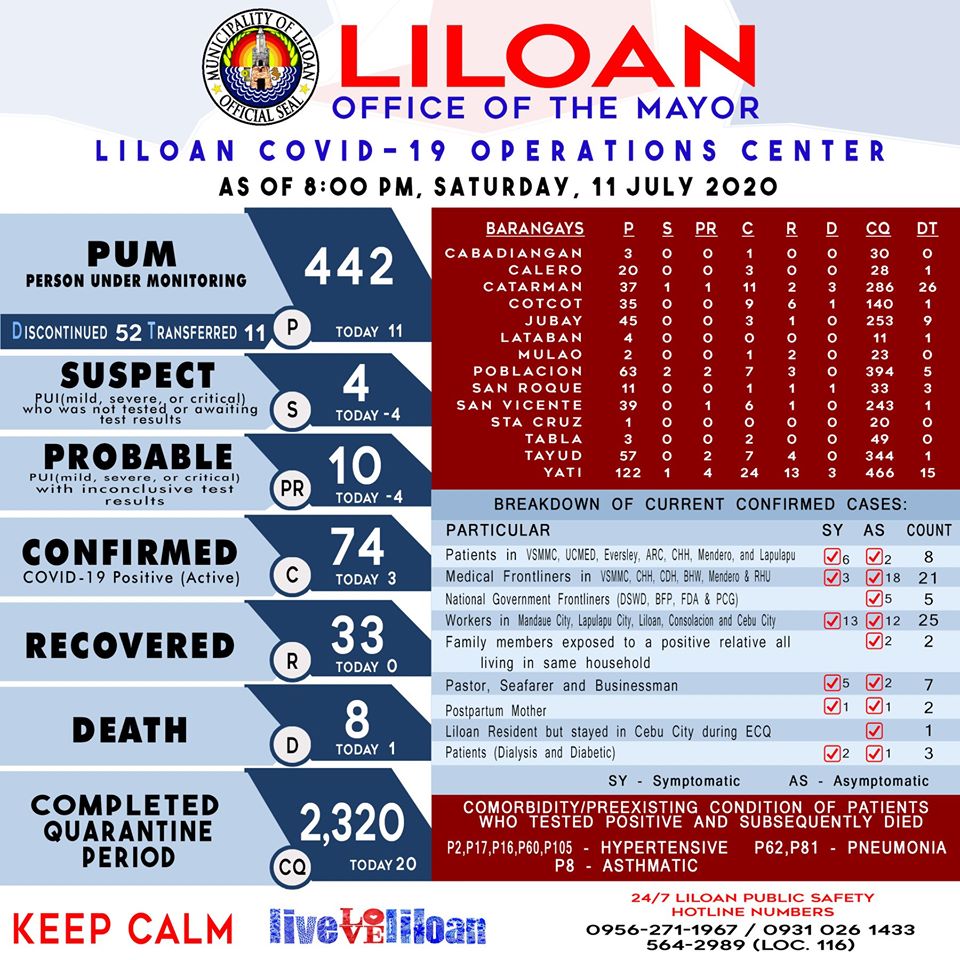 The town’s Patient No. 113 is a 32-year old medical frontliner from Purok Manga 2 in Barangay Poblacion.

The male nurse, who is assigned at the Renal Department of Vicente Sotto Memorial Medical Hospital in Cebu City, last visited his family in Liloan town on July 7.  He was swabbed the next day and has remained in isolation at the hospital’s isolation facility since.

Patient No. 114 is a 33-year old male from Purok Dabong in Barangay Yati and works at the Medical Records Office of the Mactan Doctors Hospital in Lapu-Lapu City.

He submitted himself to swab testing on July 7 after he was exposed to a confirmed case while at the hospital.

Liloan town’s Patient No. 115 is a 61-year old male resident of Purok Kalubian in Barangay Cotcot. A known hypertensive and diabetic, the patient visited the Liloan Rural Health Unit for a checkup last June 27 after he experienced numbness of the body.

He was rushed to the emergency room at Eversley Hospital in Mandaue City last July 8 after he suffered hypertension and high levels of blood sugar. He was also swabbed on the same day.

Patient No. 115 remains asymptomatic and is now on home isolation while he also takes the prescribed medications for his pre-existing conditions.

“The Liloan Covid-19 Operations Center is doing the contact tracing of all persons who had direct contact or were exposed to the confirmed cases. Mayor Christina Frasco has ordered that those who have been exposed to all confirmed cases should strictly undergo isolation for 14 days and that all areas or places of residence should be sanitized,” the town’s advisory said.