CEBU CITY, Philippines — The Commission on Audit (COA) has recommended to the city government of Mandaue to impose sanctions to its officials and employees who are responsible for the non-remittance of withheld taxes amounting to P6.2 million to the Bureau of Internal Revenue (BIR) in 2019.

Under BIR regulations, withheld taxes are supposed to be remitted to the agency on the 10th day of the following month when the amount was withheld.

This leaves an unremitted withheld amount of P6,265,625.19, which may already be subject to penalties and surcharges due to the delayed remittance. 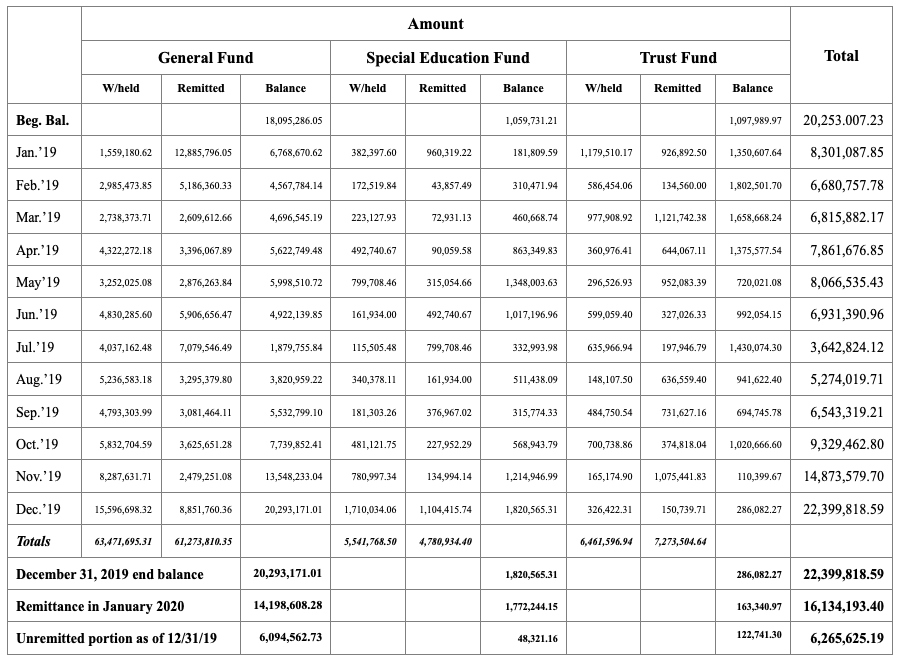 COA added that the unremitted balance accumulated from the previous years, which was at P20.25 million at the start of 2019,  shows that the city has not practiced remitting the exact amounts withheld.

In its audit report, COA also said the basis of the amount withheld and the remittances was “doubtful.”

“This has already been brought up to the attention of Management but had remained unacted,” COA noted.

“Furthermore, the general ledger of the Due to BIR account under the General Fund (GF) revealed that the total amount remitted for each month does not equal to the total amount withheld as shown in the table above.”

Section 251 of the National Internal Revenue Code (NIRC), on the other hand, mandates that “any person required to withhold, account for, and remit any tax imposed by this Code or who willfully fails to withhold such tax, or account for and remit such tax, or aids or abets in any manner to evade any such tax or the payment thereof, shall, in addition to other penalties provided for under this Chapter, be liable upon conviction to a penalty equal to the total amount of the tax not withheld, or not accounted for and remitted.”

Quoting its inquiry with the city’s Accounting Section, COA said that the office could not provide a breakdown of the unremitted taxes with respect to the months that these were collected and supposedly remitted “due to non-reconciliation between the amounts remitted against the record of suppliers whose taxes were withheld.”

“The undue delay in the remittance of taxes resulted in the accumulation of the Due to BIR account, thus, may subject the City and the responsible officials to penalties and surcharges,” COA said.

Aside from possible penalties that the city may incur due to the delayed remittances, COA added that the late remittance of the taxes adversely affects the goal of the national government to promptly collect taxes which is necessary for the allocation of funds for its programs.

“Had there been proper monitoring of the account, the total unremitted taxes could have been avoided and/or could not have accumulated to a total of ₱6,265,625.19. The accumulation of these unremitted taxes withheld exposes the City to misappropriation of the unremitted funds and imposition of surcharges, interests, and penalties by the BIR for non-remittance on time,” COA said.  /dcb