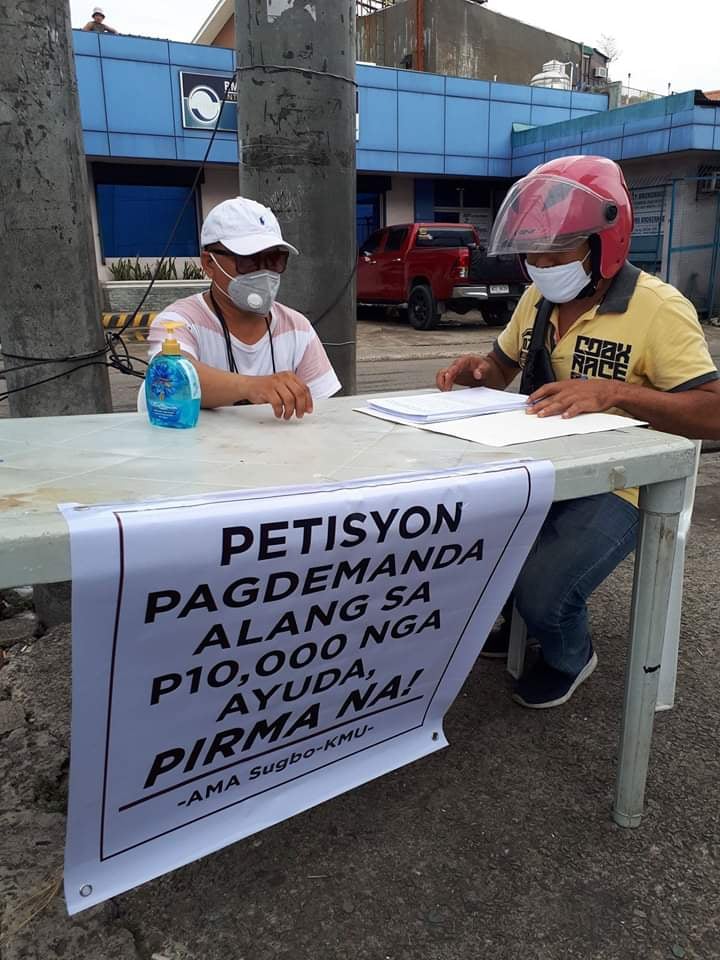 AMA Sugbo KMU launched a signature campaign calling for the government to grant P10,000 unemployment assistance to workers who lost their job because of the COVID-19 crisis in three sites in Mandaue City and Lapu-Lapu City on Tuesday, July 21, 2020. | photo from AMA Sugbo KMU

“We demand from the government, particularly the DOLE and the DSWD, to provide workers the relief and assistance that is due to them, especially in a time of crisis such as this,” AMA Sugbo-KMU Chairperson Jaime Paglinawan said in a statement.

The signature campaign by the militant labor group was held in three sites in the cities of Mandaue and Lapu-Lapu led by Liwayway Workers’ Union, and other workers in the two cities.

During the onset of the implementation of the enhanced community quarantine (ECQ) in the country, DOLE allocated funds for its COVID-19 Adjustment Measures Program (CAMP) financial assistance for employees who lost their jobs because of the closure of the establishments.

However, last April 16, DOLE-7 announced that they have already stopped accepting applications for CAMP effective April 15 as the budget for the program has already maxed out.

Both labor and business groups then called on the department to allocate more funds as those who benefited from the program comprise only around 17 percent of those who were actually displaced by the pandemic.

Aside from the cash aid, Paglinawan also called on the government to initiate economic programs to create more jobs in order to solve the economic crisis for the long term. /bmjo