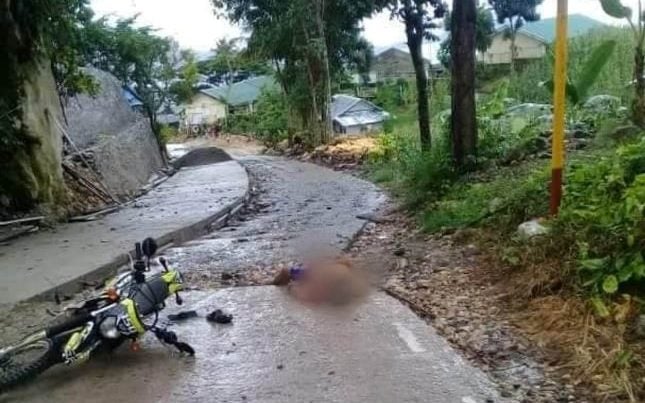 One of the victims is slumped on the road in Barangay Magsaysay, Guihulngan City, Negros Oriental. | contributed photo

Based on the initial investigation of the Guihulngan police, both victims were said to be swine traders and were onboard their motorcycles when they were fired at by still unidentified men.

Police Senior Master Sergeant Emmanuel Magallones of the Guihulngan Police Station said that they found at least 40 empty shells and cartridges of M16, 9mm and .45 caliber firearms in the area.

According to Magallones, they are still gathering more information from witnesses on how many assailants were in the area during the shooting.

Magallones said that they are also still working to determine the motive behind the killing.

One angle they are looking into is mistaken identity, that maybe perhaps perpetrators thought the victims were members of the police or military.

Incidentally, the shooting happened exactly three years since Guihulngan Police Chief Superintendent Arnel Arpo and four of his men were killed in an ambush in the same city.

Magallones said that there have been previous incidents were policemen, military forces and even barangay officials were ambushed in the area.

(But we’re not limiting our possibilities to whether what the motive was. We will still investigate this.) /bmjo