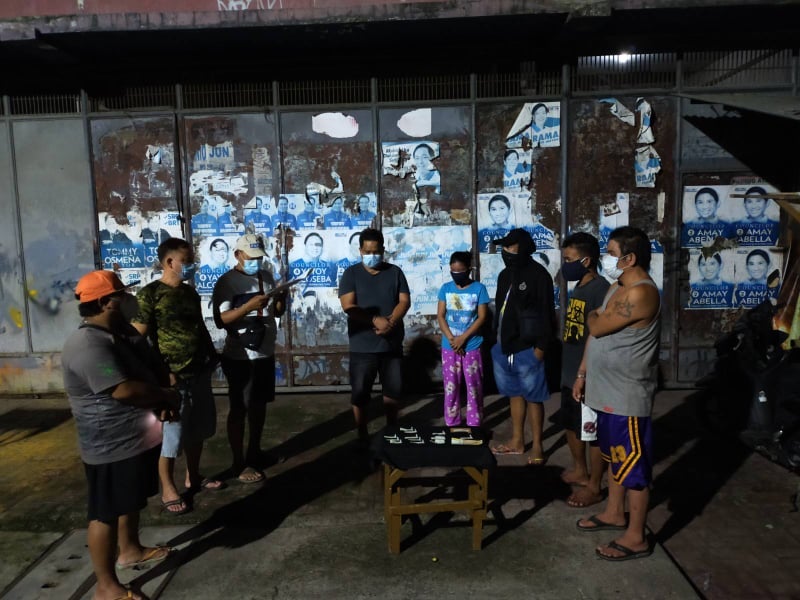 An illegal drug distributor (right) was arrested together with his three customers (2nd, 4th, and 5th from right) during a buy-bust along Tres De Abril Street in Barangay Pahina San Nicolas, Cebu City at around 11:45 p.m. on Friday, August 7. | Photo Courtesy of PMaj Eduard Sanchez

CEBU CITY, Philippines — A drug peddler whom police placed under monitoring for a month was finally arrested during a buy-bust operation late night on Friday, August 7, while transacting with a police poseur buyer along Tres de Abril Street in Barangay Pahina San Nicolas.

San Nicolas police confiscated 10.8 grams of suspected shabu worth at least P73, 440 from the possession of Edwardo Ramas, 43, of Alaska, Mambaling.

Police also arrested three others who were said to be buying shabu from Ramas during the police operation.  The other arrested individuals were identified as Dante Ylaya, 39; Vernanie Ylaya, 37; and Gutierez Constancio Dagala, 48.  Dante and Vernanie are cousins and are Ramas’ neighbors in Alaska, Mambaling while  Dagala is from Barangay Kamputhaw.

Although a new drug personality, Police Major Eduard Sanchez, chief of San Nicolas Police Station, said Ramas has been very “discrete” with his transactions, the reason why it took them a month before they finally collared him.

Sanchez said that complaints for the violation of the Comprehensive Dangerous Drugs Act of 2002 will be filed against Ramas and the three other arrested individuals on Monday, August 10. / dcb