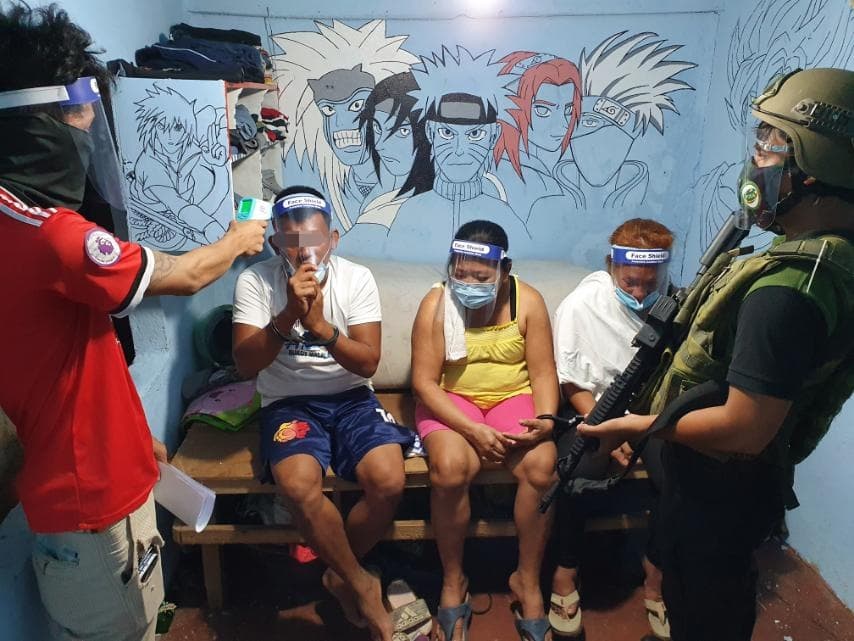 Three family members of a family were caught in a buy-bust operation in Barangay Sambag 2 Cebu City on Thursday afternoon, August 13, 2020. | Photo Courtesy of PDEA-7

CEBU CITY, Philippines — Three members of a family here who were allegedly into the illegal drug trading business were arrested in a buy-bust operation conducted at their home in Barangay Sambag 2 on Thursday afternoon, August 13, 2020.

The Philippine Drug Enforcement Agency in Central Visayas (PDEA-7) said that Teodoro L. Villamala Jr., 38, and his mother, Magdalena L. Villamala, 58; and aunt, Josephine Labistre, 40, are currently detained in its facility while a case for violating Republic Act 9165 (Comprehensive Dangerous Drugs Act) is being prepared against them.

During the operation, four packs of suspected shabu weighing eight grams, with an estimated value of P54,000, were found in the family’s house where the buy-bust was conducted.

According to PDEA-7 spokesperson, Leia Albiar, the subject of the operation was Teodoro, who was put under surveillance for one week before the buy-bust. The discovery of Teodoro’s illegal activities came from a concerned citizen. It was later found that he was also in the drug watchlist of the police.

Teodoro is said to be able to dispose at least 100 grams of illegal drugs per week.

Upon investigation, PDEA-7 found that the family has had a history with illegal drug activities as Teodoro’s brother, identified as Frederick Villamala, was also caught and killed during a PDEA-7 buy-bust operation last August 2017. /bmjo

Read Next
Do what we can ‘in so far as’