Roach on Pacquiao: 2 more fights then run for president 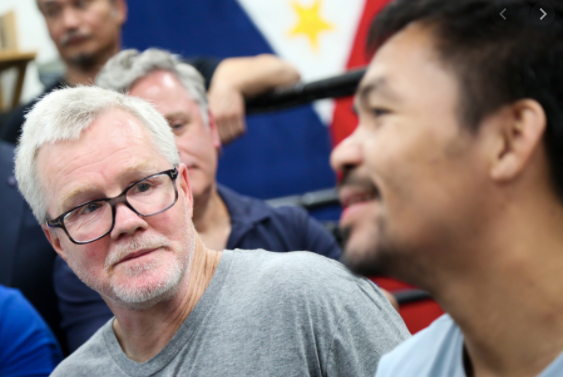 In an interview with veteran boxing writer Dan Rafael, Roach said that he’s had discussions with the Filipino legend about fighting some more before the possibility of seeking the highest position in the Philippines.

“I’ve had discussions with Manny on having two more fights for his career and then maybe (stay) in the politician side of it,” Roach told BoxingScene.

“I said, I want to run your campaign,” also joked Roach.

Pacquiao, who currently holds a seat in the Senate, hasn’t fought since defeating Keith Thurman for the WBA (Super) welterweight belt in July last year.

“Manny would like to fight a couple of more times and then run for the presidency of his country,” Roach said. “The first fighter to ever do that and it will be another part of his history and I think he will be really good at.”

While a lot of boxers–and even a mixed martial arts star– have announced their interest in facing the champion, who is still a great crowd draw at 41, there’s still no confirmed plans for Pacquiao’s next fight.

Roach, though, hopes to see Pacquiao back in the ring by the end of the year or early next year and the Hall of Fame Trainer already has names in mind for a possible opponent.

But Roach said there’s still one name that piques the Filipino boxer’s interest the most.

“What he would like best is (Floyd) Mayweather one more time,” Roach said.