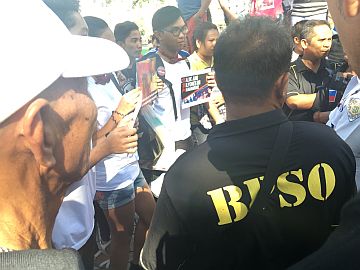 CEBU CITY, Philippines — The Cebu City Police Office (CCPO) will soon start training the barangay peace and safety officers (BPSO) or barangay tanods with police intervention techniques. Skills that will be useful as the city security force prepares for the return of augmented personnel to their original areas of assignment.

Police Lieutenant Colonel Wilbert Parilla, director for operations of CCPO, told reporters this morning, August 29, 2020, that the BPSO’s strength would be fully used in implementing the health protocol and other guidelines for COVID-19.

They would also be trained on other public safety measures that would be added during this time, now that the augmented police personnel were slowly being sent back to their original  posts, Parilla said.

(They play a very important role especially now that the augmentation personnel are slowly being pulled out… and it has left a large vacuum considering that there were 1,000 augmentation personnel sent here and if that is what we lose because of the downgrade in the quarantine classification. So we need to bring back and tap the barangay tanods who are the partners of police in terms of public safety.)

Read: In Photos: Cebu City tanods to get new uniforms

According to Parilla, some of the intervention techniques that will be taught to the BPSOs will include skills in handcuffing and handling of the baton as well as other basic knowledge on arresting.

Parilla said that in coordination with the local government unit (LGU), the schedule and programs were being arranged as to when the trainings would be and how the CCPO would be able to go about it for the coming days./dbs