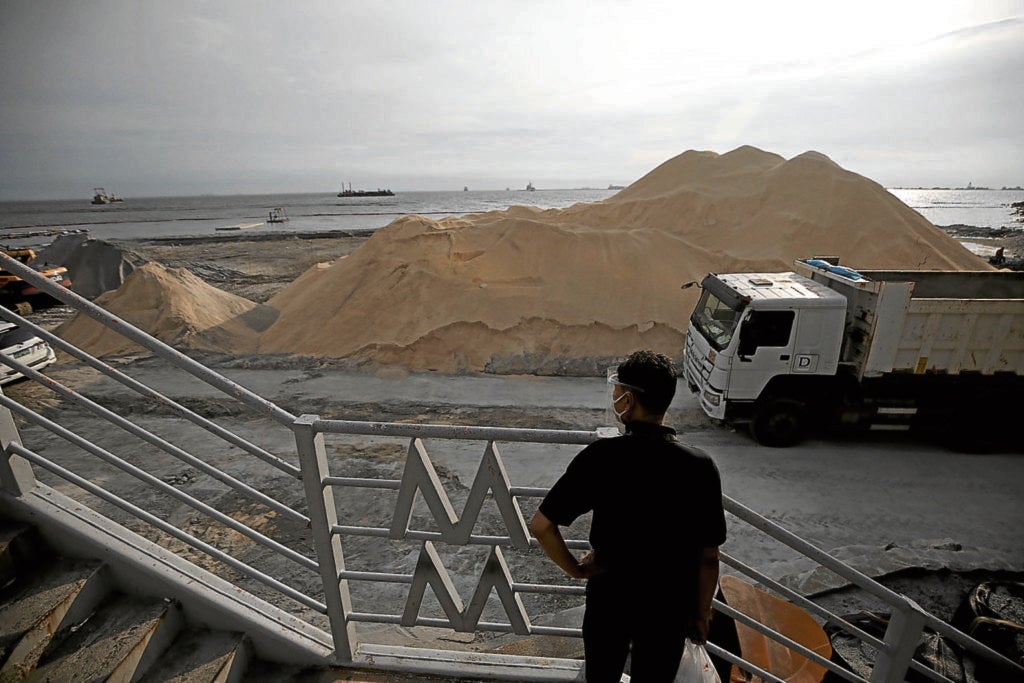 TO SAVE THE BAY A 500-meter stretch of the 190-kilometer coastline of Manila Bay will be covered with sand derived from crushed dolomite in a bid by the government to beautify the scenery and encourage the public to protect it. Environmental activists are not exactly pleased. —RICHARD A. REYES

MANILA, Philippines — After undergoing a major cleanup and losing much of its technicolor garbage last year, Manila Bay is getting a ”white” makeover.

But environmentalists and fisherfolk groups are seeing red instead, questioning the latest project of the Department of the Environment and Natural Resources (DENR).

Mobilizing a fleet of earth-movers and other heavy equipment, the DENR on Thursday starting pouring ”white sand” on a 500-meter stretch of the bay’s naturally gray shoreline in Manila, near the Baywalk strip along Roxas Boulevard.

The project is part of the Manila Bay Rehabilitation Program launched by Environment Secretary Roy Cimatu in January 2019 to save the bay from decades of pollution and urban blight, as ordered by the Supreme Court.

“We’ll make the coastline white sand so that when people see [it], [they will realize that] they need to take care of this and protect this,” Environment Undersecretary Benny Antiporda said in a radio interview.

But Antiporda later clarified that the ”sand” was actually made of crushed rocks of dolomite, a calcium magnesium carbonate, that were transported to Manila from Cebu province.

He then explained that transporting sand is illegal under Republic Act No. 7942 or the Philippine Mining Act of 1995.

Later in an interview with the Inquirer on Thursday, Antiporda could not immediately say where the dolomite was sourced, saying this aspect of the project was handled by the the Department of Public Works and Highways.

The DENR hopes to complete the project by Sept. 19, in time for International Coastal Cleanup Day.

Critics were quick to point out how the DENR project could prove destructive not just on the bay but also on the area in Cebu where the “sand” was sourced.

Sand mining could trigger coastal erosion and harm ecosystems near the shores, and leave coastal communities with less protection against storm surges and tsunamis.

The fisherfolk group Pamalakaya called out the DENR for its “completely absurd and highfalutin rehabilitation” effort, saying it would hardly solve “the environmental degradation problems of the bay.”

“The DENR doesn’t have any concrete plan to restore the bay, [so] it resorts to … external beautification, which is actually a sham and artificial, instead of genuine rehabilitation,” said Pamalakaya president Fernando Hicap.

For a more effective and permanent solution, DENR should instead grow mangroves and seagrass on the bay, he said.

“We demand transparency from the DENR on the full details of the white sanding project; how much does it cost and what granular materials were used. The filling of white sand along the coast of Manila Bay is actually a whitewashing of the government’s failure to rehabilitate Manila Bay,” Hicap said.

In a TV interview, Greenpeace Philippines campaigner Sonny Batungbacal warned that covering the bay’s coastline with “synthetic” sand “would not do anything.”

The artificially supplied sand could easily be washed out by storm surges or rising tides, Batungbacal added.

Antiporda said the project’s critics were just “capitalizing on the good deeds of our administration just to promote their relevance in a situation like this.”

“If we will listen to Pamalakaya and Greenpeace, the chances of saving our bay would only [be] slim. The Supreme Court’s mandamus (order) for us to rehabilitate the bay has been overdue. Now that we are doing it they are discrediting us?” he said. “I don’t think that’s fair to people who are working hard.”

It was not the first time government officials thought of giving Manila Bay a new look to mimic the world-famous beach on Boracay Island.

A plan to bring in white sand was also considered by the city government during the term of the late Manila Mayor Alfredo Lim.

Read Next
Relearning the simple life