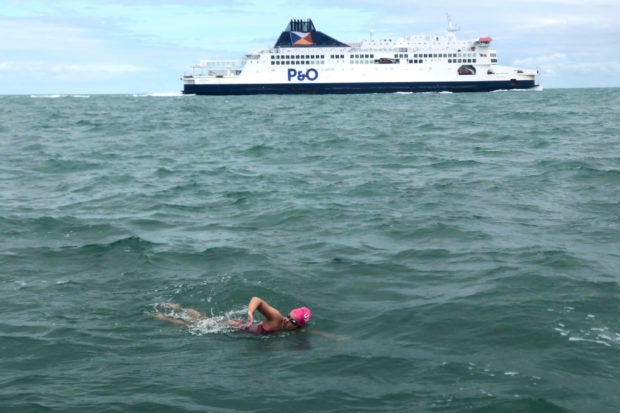 In this photo provided by Darcie DeBlois-Rivard, long distance swimmer Vera Rivard, 16, of Springfield, N.H., below, swims the English Channel between Dover, England and Calais, France, as a channel ferry sails by, above, Tuesday, Sept. 1, 2020. The swim took her more than 14 hours, and she is the second American to cross the channel this year. (Photo Darcie DeBlois-Rivard via AP)

A 16-year-old from New Hampshire successfully swam across the English Channel, completing a 33-mile (53-kilometer) swim by reaching a sandy beach in France after darkness fell.

Vera Rivard, of Springfield, left Dover in the United Kingdom around 9:30 a.m. and arrived on a beach near Calais, France, just before midnight on Tuesday.

She crossed “roly-poly” waves in 64 degrees Fahrenheit (18 degrees Celsius) water, accompanied by a pilot boat affiliated with the Channel Swimming Association. Her mother and younger sister were aboard as her crew.

The swim took her more than 14 hours, and she is the second American to cross the channel this year, the Valley News reported.

“As she leaves the beach in England for her English Channel attempt, I will be the proudest parent ever! Not if she finishes, not how fast she swims, but that she was brave enough to start,” Rivard’s mother, Darcie DeBlois-Rivard, wrote beforehand on Facebook.

Rivard completed her first 1-mile (1.6-kilometer) open water swim at the age of 10 in Vermont, and worked up to a 25-mile (40-kilometer) swim that crossed the Canadian border two years ago, she said.

After that, she booked a slot to swim the English Channel and has been training ever since in both the United States and Ireland, she said.

She said she was just happy to get into the water at the beach in Dover. 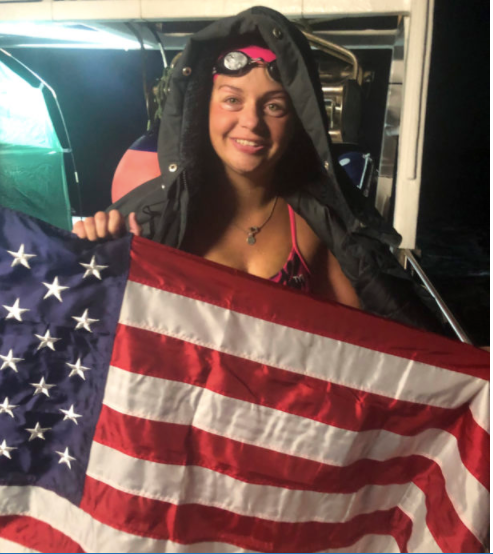 Long distance swimmer Vera Rivard, 16, of Springfield, N.H., displays an American flag while aboard a vessel off the coast of France, late Tuesday, Sept. 1, 2020, after swimming the English Channel between Dover, England, and Calais, France. Image: Darcie DeBlois-Rivard via AP

“I wasn’t sure it was going to happen because of everything that is going on right now with the pandemic, and I was just so happy to get in the water at that point,” Rivard said.

In compliance with the Channel Swimming Association rules, Rivard did not leave the water or touch anyone or anything that floats for the duration of the swim. But she stopped to tread water every 45 minutes to eat an energy gel and powdered energy drink.

As the sun set, she said an almost full moon rose above the horizon.

“I knew I was either going to start in the dark or end in the dark because there aren’t enough hours in the day, so I put a light on the back of my goggles so the boat can see me more easily,” she said.

Rivard’s swim cost her family around $15,000, about a third of which was covered by donations and sponsorships, the Valley News reported. Rivard and her family quarantined for two weeks before her swim in Dover.

She completed a long-distance swim around Manhattan island in July and hopes to swim a third major open water course to Santa Catalina Island off California — the third in a “triple crown” of long distance swims — at some point in the future. IB

Read Next
Rescued seafarers in Japan are from Cebu