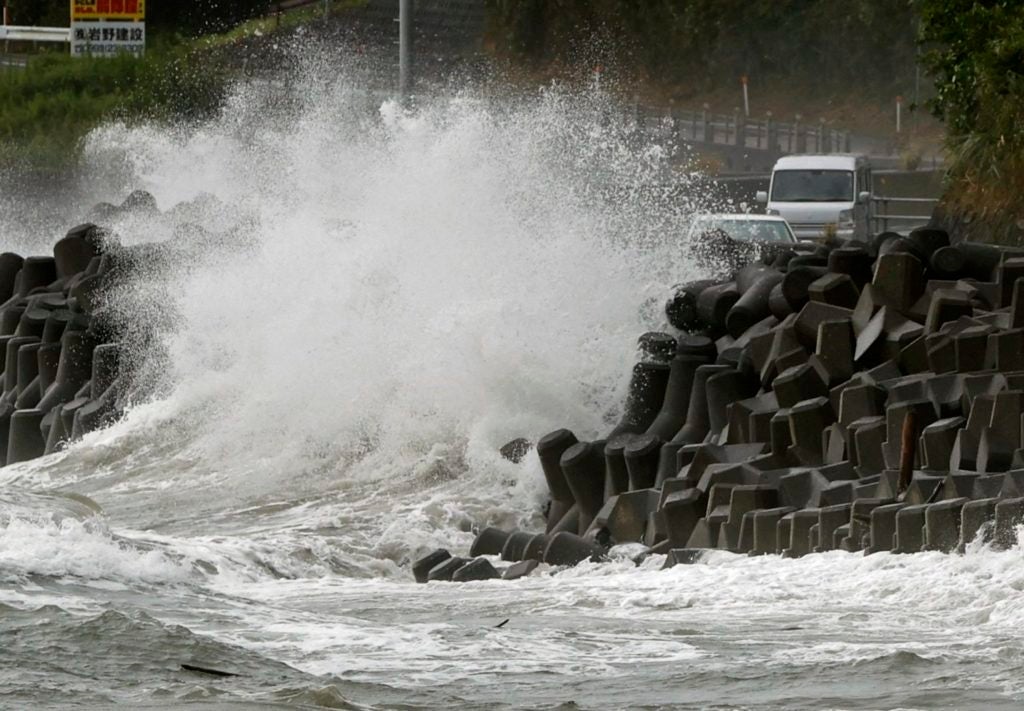 High waves pound the coast of the Kagoshima city, southwestern Japan Sunday, Sept. 6, 2020. The second powerful typhoon to slam Japan in a week unleashed fierce winds and rain on southern islands on Sunday, blowing off rooftops and leaving homes without power as it edged northward into an area vulnerable to flooding and mudslides. (Takuto Kaneko/Kyodo News via AP)

TOKYO  — The second powerful typhoon to slam Japan in a week unleashed fierce winds and rain on southern islands on Sunday, blowing off rooftops and leaving homes without power as it edged northward into an area vulnerable to flooding and mudslides.

Weather officials warned that the rainfall from what could be a record storm would be fierce. Warnings were issued days in advance for people to be ready to take shelter and stock up on food and water.

Several rivers on the main southwestern island of Kyushu were at risk of overflowing, officials said. Public broadcaster NHK TV said evacuation warnings were issued for more than 50,000 people in Okinawa and Kyushu, including Kagoshima and Nagasaki prefectures.

News footage showed people in Kyushu starting to gather at gymnasiums before winds gather momentum in the evening. Social distancing will be in place to guard against the coronavirus pandemic, officials said.

The Japan Meteorological Agency said Typhoon Haishen, which means “sea god” in Chinese, was packing sustained winds of up to 162 kilometers (100 miles) per hour after battering Okinawa and the southern Kyushu island of Amami Oshima early Sunday. Alerts for strong winds, waves, high tides, rainfall, and lightning were issued for Amami Oshima alongside evacuation orders.

There were no immediate reports of any injuries in Okinawa, home to more than half of the roughly 50,000 U.S. troops based in Japan under a bilateral treaty.

Haishen was not only powerful — equivalent to a Category 2 hurricane — but also large in its reach, according to the meteorological agency.

Bullet trains were temporarily halting services, and dozens of flights were canceled. All Nippon Airways said such cancellations will continue Monday and possibly on Tuesday for flights in southern Japan, such as Yamaguchi, Kochi, and Fukuoka.

Haishen’s projected course has it hitting the Korean Peninsula later in the week.

A cargo ship carrying 43 crew members and 5,800 cows from New Zealand capsized off the coast of Japan. Two people were rescued, and one body was recovered. The search has been halted because of Haishen.

Read Next
Trump may be down in the polls, but he’s tops for bettors