Rockets look for new coach after another early playoff exit 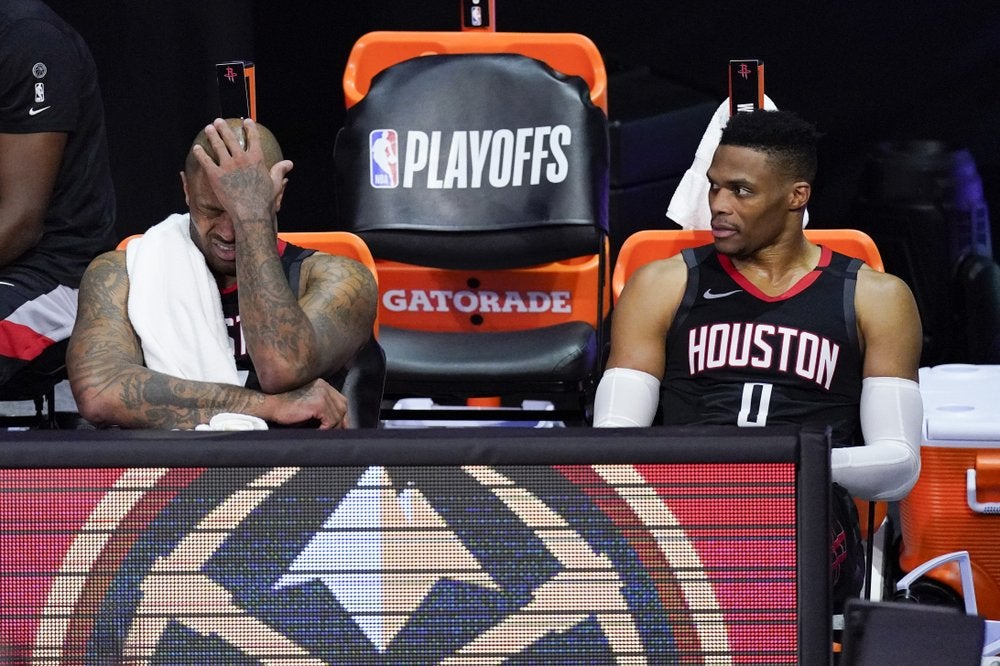 Houston Rockets’ P.J. Tucker, left, and Russell Westbrook sit on the bench in the closing minutes of a loss to the Los Angeles Lakers during the second half of an NBA conference semifinal playoff basketball game Saturday, Sept. 12, 2020, in Lake Buena Vista, Florida. | AP Photo/Mark J. Terrill

HOUSTON — James Harden and the Houston Rockets believed the addition of Russell Westbrook and their unorthodox small lineup would be what they needed to win their first title in 25 years.

Instead, they suffered another early playoff exit and must find a coach after Mike D’Antoni told them he wouldn’t return after he and management couldn’t agree on a new contract.

The Rockets beat Oklahoma City in seven games in the first round and won Game 1 against the Lakers before losing the next four games to be eliminated in the Western Conference semifinals for the second straight year.

Harden had another splendid regular season, averaging 34.3 points to lead the league in scoring for the third straight year. He was also first in the NBA in 3-pointers (299) and free throws (692) and ranked fifth in steals (1.84) and seventh in assists (7.5).

He continued that elite play in the postseason where he averaged 29.6 points a game. But the Rockets struggled to find other players to step up and help him carry to load. Westbrook missed the first four games of the Thunder series with a quadriceps strain. He returned for Game 5 of the opening round and played every game after that, but never looked quite right.

He was widely panned for his terrible performance in Game 2 against Los Angeles when he made just 4 of 15 shots and finished with 10 points and seven turnovers in Houston’s 117-109 loss.

Westbrook said after Game 5 that he was never 100% after his injury. He also said he felt behind after arriving in the NBA bubble late following a coronavirus diagnosis that kept him from working out for three weeks.

“It’s just very frustrating honestly for me, man, and knowing that the postseason is where you’re supposed to elevate your game and I was just trying to catch rhythm and there’s not time for that,” he said.

Despite Westbrook’s playoff woes, Harden said he was pleased with how his friend’s first season in Houston went and is looking forward to seeing what they can do in the future. But he believes they can’t do it alone and that the team needs to make a move this offseason to get to the next level.

“I feel like we’re a piece away and we’ve just got to keep trying to figure it out, keep trying to grow and put the right pieces around me and Russ to get to where we need to go,” Harden said.

The Rockets went all in on their small lineup when they traded center Clint Capela to Atlanta in February. They believed that lineup was more conducive to success in D’Antoni’s fast-paced offense that relies on a high number of 3-point attempts. Houston led the league this season by averaging 45.3 attempts per game in D’Antoni’s fourth season.

Now that D’Antoni is gone, it’s unclear if the Rockets will stick with their small lineup or if they will revert to a more traditional starting five with a true center.

While some questioned whether Houston’s unconventional lineup contributed to its playoff ouster, Harden thinks they would have been fine using that configuration had they executed better.

Along with Westbrook’s struggles, the Rockets were also slowed against the Lakers because of the absence of Danuel House. An important player off the bench, House was averaging 11.4 points and 5.8 rebounds in the playoffs but missed the team’s last three games after violating the NBA’s health protocols by allowing an unauthorized guest in his hotel room “over multiple hours.”

Harden called House’s actions disappointing and said it hurt the team against the Lakers.

“It affected us because obviously just the distraction and he was a huge part of our rotation,” Harden said.

But the Rockets can’t worry about what might have been, and Harden is already looking ahead. The 31-year-old is focused on trying to lead the Rockets to their first championship since they won back-to-back titles in 1994-95.

The question for Harden and the Rockets is how long until they actually get to their destination instead of just going the right way?