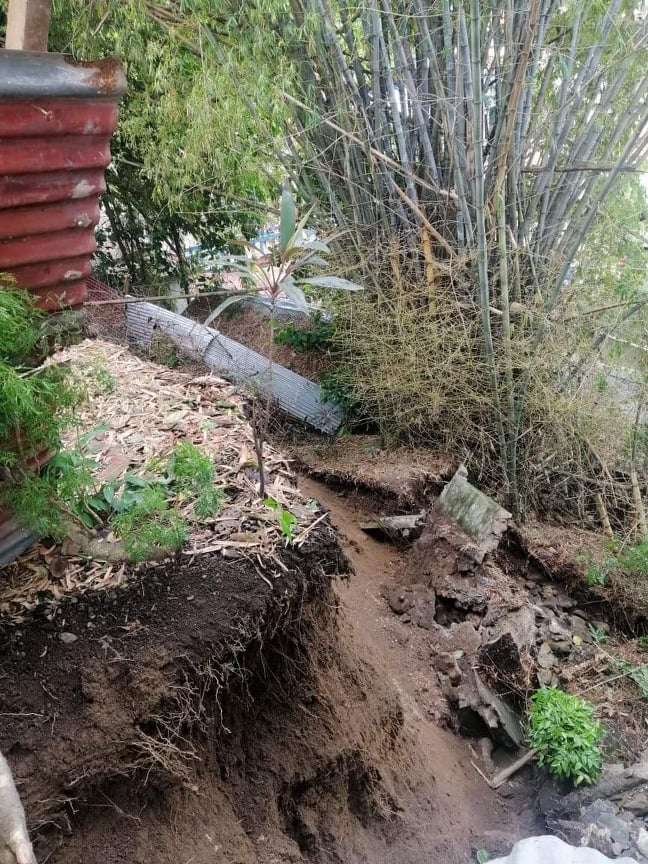 Another landslide occurred in Cebu City on Wednesday afternoon in Barangay Guadalupe. | Photo Courtesy of CDRRMO

CEBU CITY, Philippines — The results of the heavy downpour on the evening of September 15, 2020 has already caused four landslides in different barangays here.

Another one was recorded on Wednesday, September 16, 2020, this time in Sitio Rotula, Langub in Barangay Guadalupe.

The landslide, which occurred at past 1 p.m., is still attributed to the heavy downpour caused by a strengthened southwest monsoon the night before. But this time, the landslide had fully destroyed a house and partially damaged two others.

Ramil Ayuman, the officer-in-charge of the Cebu City Disaster Risk Reduction and Management Office (CDRRMO), said that the residents of the three homes had to be evacuated to the Guadalupe Barangay Gym.

No one was injured as the residents were able to evacuate before the incident.

Seven other houses stand on the danger zone and the CDRRMO is now negotiating for the evacuation of the residents as the city government does not want to risk the lives of those living in the area should another downpour happen tonight.

A total of 13 families are expected to be housed at the barangay gym Wednesday night as a precaution to another possible landslide in the area.

Ayuman said that they will have to keep the residents away from the area while they clear the damaged properties as the soil is still soft and could move anytime.

“We want to secure the area first so they cannot return yet. We want to avoid accidents,” said the CDRRMO chief.

As of now, the city government is expected to provide packed meals and other basic necessities for the families staying at the gym.

Since this is the fifth landslide since Tuesday night, Ayuman urged  residents in mountainsides to be more vigilant. If they notice any movement in the soil, they should evacuate immediately.

Though the five landslides should be a cause of concern, Ayuman praised the vigilance of the residents and the preparedness of the barangays to respond.

“Five landslides but not a single one was injured,” he noted.

Cebu City residents are encouraged to assess their surroundings tonight in case of heavy downpour and act with haste if they notice any danger as well as report possible landslide areas immediately. /bmjo