First there were almost 50 male inmates who went down with measles at  the Cebu Provincial Detention and Rehabilitation Center (CPDRC).

Last week, a woman showed symptoms of the infectious disease and had to be placed in isolation, a health official said.

She had fever, skin rashes and a bleeding nose, said Rennan Cimafranca, chief of theRegional Epidemiology and Surveillance Unit (RESU) of the Department of Health.

“We already isolated the female inmate to ensure that others will not be affected,” he said. 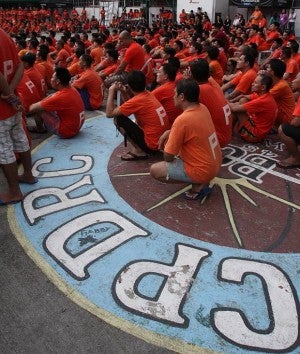 Under control
Despite the rash of measles cases, the situation remains under control, he said.

Cimafranca said  jail guards have been ordered to restrict visits to the jail facility.

“Visitors are screened well. We also want to protect them from the contagious illnesses,” he said.

Cimafranca said he suspected that the measles virus came from outside the CPDRC.

He said  20 measles cases were also recorded in Cebu City.

Jail guards and other CPDRC personnel displayed no symptoms of measles.

Measles is a highly contagious respiratory disease caused by a virus in the paramyxovirus family, which grows in the cells that line the back of the throat and lungs. It can be spread from person to person through sneezing, coughing and close personal contact.

Cimafranca said antibiotics can also be taken by measles patients as prescribed by doctors.

No jail visits during measles outbreak