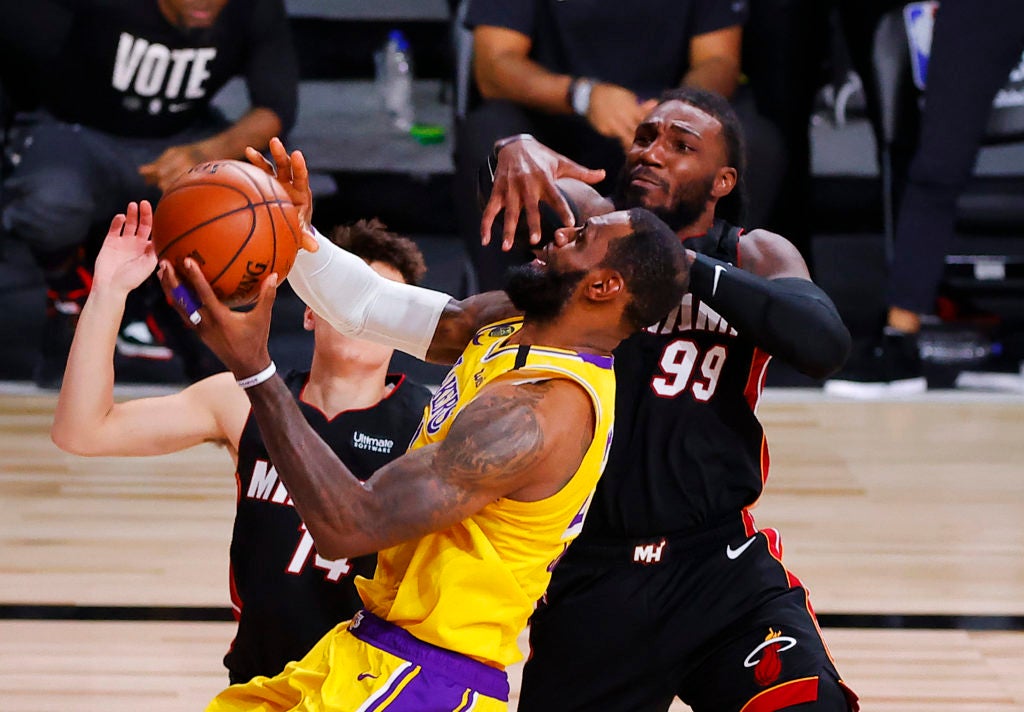 Jae Crowder of the Miami Heat defends LeBron James of the Los Angeles Lakers during the fourth quarter of Game Four of the 2020 NBA Finals at AdventHealth Arena at the ESPN Wide World Of Sports Complex on October 6, 2020 in Lake Buena Vista, Florida. | Kevin C. Cox/Getty Images/AFP

Orlando—The Los Angeles Lakers can complete the franchise’s return to the pinnacle of basketball here Friday (Saturday morning, October 10, 2020, Philippine time) as they look to seal a record-equalling 17th NBA Finals crown with a victory over the Miami Heat.

The Lakers, who returned to the finals this season after missing the post-season for six consecutive years, can clinch a series victory in game five in Orlando.

The Lakers took a commanding 3-1 lead in the best-of-seven series on Tuesday (Wednesday in the Philippines), leaving Miami needing to stage a miracle to keep their championship hopes alive.

Read: Local hoops stars say Lakers will win it all in Game 5

Only one team — the LeBron James-led Cleveland Cavaliers in 2016 — has ever come back from a 3-1 NBA Finals deficit to win the title. The odds, and momentum, are stacked firmly against Miami.

“We have a purpose of why we’re here. We’re competing for a title, and it’s the first team to four wins. There’s a lot of different narratives out there.

“We don’t give a shit what everybody else thinks. This is everything that we wanted this year, an opportunity to fight for, compete for a title, and that hasn’t changed at all through these first games.”

The fates have conspired against Spoelstra’s team, however.

Injuries to Goran Dragic and Bam Adebayo in game one robbed Miami of two key figures for games two and three.

While Adebayo returned for Tuesday’s game-four loss, Dragic remains sidelined by a foot injury and is rated as “doubtful” to feature on Friday.

“It’s supposed to get more challenging every step of the way,” Spoelstra said.

“I know the character of our group, and we are still very much committed to what our purpose is.”

Miami will look to the inspirational Jimmy Butler to lead the fightback. Butler was superb in the Heat’s sole victory of the series in game three, scoring 40 points in a virtuoso performance.

“Ain’t nobody thinking about going home over here,” Butler said Thursday. “It’s not win or go home — it’s win or win. That’s how we think about it.”

Asked what the key to victory would be, he added: “Scoring more points than the Lakers.”

That, though, is likely to be easier said than done.

After being given a bloody nose in game three, the Lakers adjusted superbly in game four, neutralizing the threat of Butler by deploying Anthony Davis to shadow the Miami small forward.

Davis, who has formed a dominant axis alongside James since joining the Lakers in 2019, is chasing a first NBA championship.

The Lakers will attempt to close the deal wearing their “Black Mamba” uniforms, a tribute to franchise icon Kobe Bryant, who died in a helicopter crash in Los Angeles in January.

So far, the Lakers are undefeated when they have worn the striking all-black strip.

“If we come out and do what we’re supposed to do, then we can remain undefeated,” Davis said Thursday.

“We just think that for all the things that happened this season, with our team specifically and our organization, that to be able to close it out in the Black Mamba uniforms will just make it all worth it.

“For us to close it out in his honor is something that we look forward to. An insane amount of pressure, for sure, but we don’t want to lose. We don’t want to let him down.”

While James and Davis provide the starpower, the Lakers’ revival has also owed plenty to consistent contributions from a talented supporting cast featuring the likes of Kentavious Caldwell-Pope, Danny Green, Rajon Rondo and Kyle Kuzma.

“That has been the story of our season,” Lakers coach Frank Vogel said.

“We set out at the beginning of the year to be a team that’s greater than the sum our parts.

“Obviously we have two mega-stars, but we needed everybody else to try to star in their roles. Without those guys, we are not in the position we are in now.”