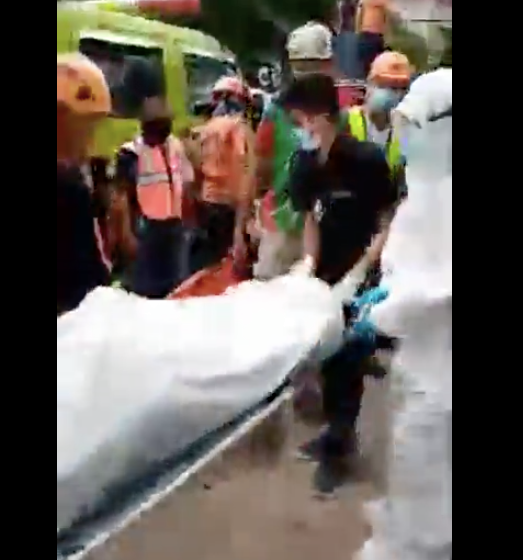 The body of 14-year-old Hansel Dayundon is retrieved among the garbage and debris under the Rahmann Bridge along General Maxilom Avenue in Cebu City this afternoon (October 15). CDN Digital | Paul Lauro

CEBU CITY, Philippines — The body of 14-year-old Hansel Dayundon has finally been found after more than 30 hours of search and retrieval operations.

Dayundon was found at 2:20 p.m. on Thursday, October 15, 2020, underneath the garbage in the Kamputhaw River in the Rahmann Bridge area along General Maxilom Avenue (also known as Mango Avenue), which is below the parking lot of a hotel.

Ramil Ayuman, head of the City Disaster Risk Reduction and Management Office (CDRRMO), said they started the search of the 14-year-old boy after he was reported missing on the evening of October 13, 2020.

The boy fell into the Kamputhaw River on Tuesday evening amid the heavy rains.

His guardian and grandmother, Lucia Mariveles, said that Dayundon was sleeping under the Rahmann Bridge in Mango Avenue since their family were homeless.

When he woke up, the water was already rising and he and his cousins attempted to go back up the bridge, but the current was too strong and Hansel fell into the river.

Another cousin was supposed to be waiting on the other side of the river to save Dayundon, who was carried away by the strong current of the flood water, but Dayundon hit the foundation of the hotel, which built its parking lot right above the creek.

When he hit the foundation, Dayundon then went under and his body had not seen since then until this afternoon.

Dayundon’s body was found among the garbage and debris in the creek.

“Naanod siya wala na siya nakagunit (He was carried by the current and he could not hold on),” said Mariveles.

Dayundon was supposed to turn 15 years old this December 2020, and just three days away from being rescued by the city government, which has planned a rescue operations for all homeless individuals on October 16, 2020.

Cebu City Mayor Edgardo Labella came to oversee the retrieval operations of the body and promised that all burial expenses would be shouldered by the city government.

“Kita ang bahala magpahimutang sa lawas (We will cover the cost of the burial),” said the mayor.