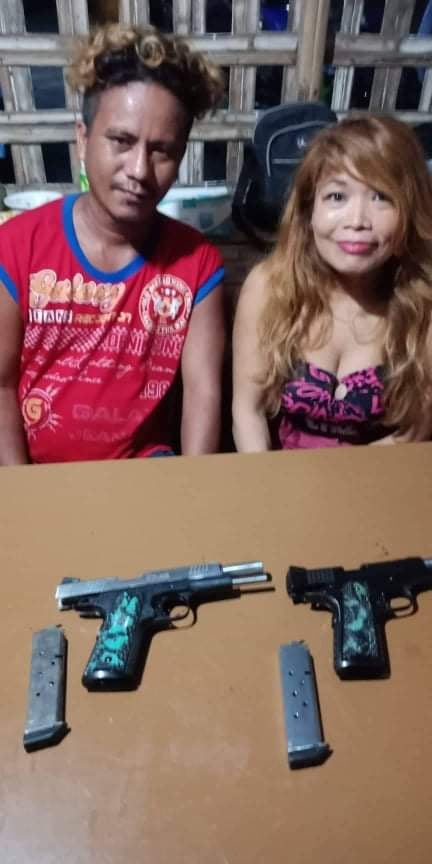 CEBU CITY, Philippines –A couple landed in jail after they were arrested by the police on Friday, October 16, for the possession of loose firearms.

Police Lieutenant Colonel Randy Korret, head of the Intelligence Unit of the Cebu Police Provincial Office (CPPO), identified the arrested individuals as Arvie Diosana, 30, and Liberty Jay Trinidad, 47. Diosana is from Barangay Mainit in Malabuyoc town while Trinidad is from Barangay Tayud in Liloan town.

Maratas was supposed to be the subject of the police operation at about 5:30 p.m. on Friday, October 16.

Korret said they sent a poseur buyer to a motor shop in Barangay Tayud in Liloan town that Maratas owns to transact with the suspect.  But he immediately boarded a parked motorcycle and fled when he sensed the presence of authorities.

The police team ended up arresting Diosana and Trinidad who were at Maratas’ motorcycle shop.  They also recovered two unlicensed .45 caliber handguns from Trinidad’s possession.

(We received information that they are selling loose firearms that is why we immediately planned the operation.  They do not belong to a particular group.  They operate on their own to earn.)

During their investigation, Koret learned that Maratas do not transact with potential buyers and would instead send Diosana and Trinidad.

He said it was Trinidad who met with the police poseur buyer on Friday.  She later brought him to the motor shop in Barangay Tayud to meet with Maratas.

Korret said they continue to investigate the arrested individuals, who are now detained at the Liloan Police Station, to get additional information on their operations and the identity of their buyers.

During their background check, they found out that the two suspects did not have previous criminals records.

Korret said that they are now preparing for the filing of charges for the violation of Republic Act 10591 or the Comprehensive Firearms and Ammunition Regulation Act against the three suspects. / dcb

Read Next
Fair weather in Metro Cebu on Oct. 17 – Pagasa