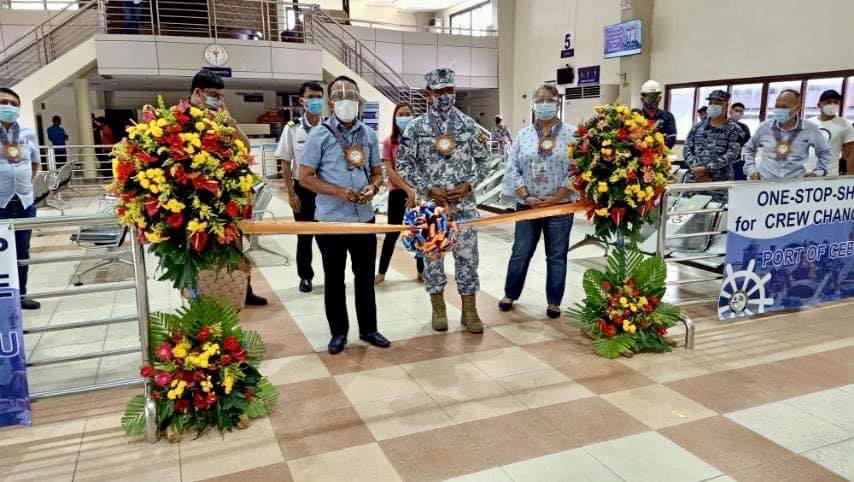 The crew change hub at the Cebu port has been activated recently. | CPA photo

MANDAUE CITY, Cebu — The Department of Transportation (DOTr) announced on Friday, October 16, the activation of the crew change hub that is located at the Port of Cebu.

An advisory from the Cebu Port Authority (CPA) said that on October 14, the Cebu Provincial government also issued Executive Order No. 27 to confirm the activation of the crew change hub.

“Cebu is a strategic location for crew change, as it is at the heart of the Visayas. With the approval of the Port of Cebu as a crew change hub, the port can begin to facilitate the process for arriving and departing seafarers coming to and from the Visayas. We thank all our partners, especially the Regional Task Force 7, the Cebu Provincial government and the Cebu City government, for their strong and unwavering support since the planning stage. The whole-hearted cooperation and close coordination afforded to the team made the swift activation possible,” DOTr Assistant Secretary for Maritime Narciso Vingson was quoted saying in the CPA advisory.

Read: Capitol to issue guidelines on return of seafarers to support crew change hub in Cebu

Raul Del Rosario, Office for Transportation Security (OTS) and One-Stop Shop (OSS) head, said that the OSS office in Cebu will be operated with CPA as the lead agency.

(We have established the OSS here in Cebu port, with the CPA as lead and Secretariat, so that seafarers can undergo a smooth flow of processing especially in terms of ensuring their health. OSS is important for the swift and safe return of our seafarers, especially those of our fellow Filipinos who have been at sea for a long time and have been longing to be with their loved ones.)

CPA General Manager Leonilo Miole said that the Port of Cebu will now start receiving requests for crew change from both domestic and foreign-registered vessels.

“This is a milestone not just for the Port of Cebu, our maritime partners, and our seafarers, but also for Cebu, in general, as this is also seen to generate economic activities and revenues,” he said.

Miole said safety protocols are in place to avoid possible transmission of the coronavirus disease 2019  (COVID-19) during crew change operations.

Based on the DOTr and IATF approved crew change protocol, all arriving vessels will be anchored at the designated anchorage or docking site authorized by the CPA and the Philippine Coast Guard (PCG).

Upon arrival at the Port of Cebu’s OSS facility, seafarers are required to immediately proceed to the registration booth and undergo the mandatory swab testing procedure.

After they complete the OSS procedures, seafarers are to board their assigned vehicles that will take them to their designated quarantine facilities that are approved by the Bureau of Quarantine (BOQ) and will stay there while they wait for the release of their swab test results.

The Overseas Workers Welfare Administration (OWWA) is responsible for the operation of the quarantine facility and the accommodations of the seafarers who are waiting for their swab test results, the CPA advisory said.

For embarking vessel crew members, only those with negative COVID-19 test results and those issued a Certification of Containment will be allowed to board their designated vessels.

“Health and safety protocols must also be observed by all embarking crew members,” the CPA advisory reads.

The Central Visayas office of the Maritime Industry Authority (MARINA) headed by Director Marc Anthony Pascua is also given an area at the OSS to make sure that seafarers’ concerns are addressed.

Earlier, DOTr Secretary Arthur Tugade authorized the activation of crew change hubs in the country to  “address the global need for the fresh crewing of vessels, and to ensure the health, safety, welfare and employment of seafarers, as they can only serve on board a vessel without a leave only up to 11 months, according to the  International Labour Organization (ILO) 2006 Maritime Labour Convention (MLC).”

Crew change hubs in the country will primarily benefit seafarers, who are stranded onboard ships with expired contracts due to imposed travel restrictions due to COVID-19, the CPA advisory said.

Ahead of the operation of the crew change hub at the Port of Cebu, DOTr also authorized the opening of hubs that are located at the Port of Manila, the Port of Capinpin in Bataan, and at the Subic Bay Freeport Zone.

In the coming days, hubs that are located at the ports in Batangas and Davao will also be made operational. /dbs

Read Next
EXO’s Chen to join military this month