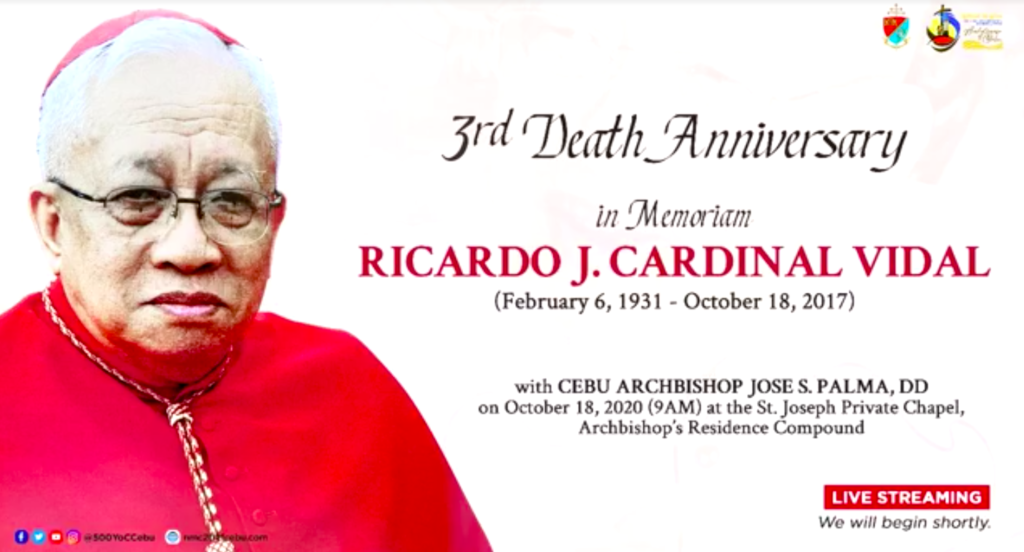 Present Cebu Archbishop Jose Palma presided the Holy Mass on Sunday morning, October 18, marking the third year since Cardinal Vidal passed away which was livestreamed through the Archdiocese of Cebu’s Facebook page.

“It is precisely for love of his eminence that you want to be united as we celebrate his Mass and his third death anniversary,” said Palma in his homily.

“Let’s unite our hearts in this thanksgiving for such a humble man, a very faithful servant (to the Lord). Of course, we entrust him to the Lord of love (that) may he receive the peace, the fullness of life, joy he longs for,” he added.

At that time, Vidal was the country’s most senior cardinal.

For Palma, he remembered the late cardinal ‘almost like a father’ who would often check on the younger bishops on how they are faring with their lives here in Cebu.

“There are many things I treasured in my heart. Among others, the way he would deal with me, of course, being (part) of the younger sets of bishops, almost like his son,” said Palma.

“All of us have a mission in this world. The Lord has a purpose for us, and that is our mission… But in all of these I’m sure the likes of Cardinal Vidal will tell us, give to the Lord the glory that is His,” said Palma.