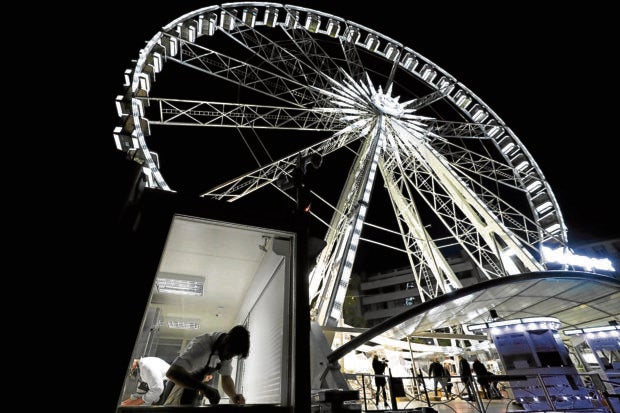 ROUND AND ROUND The Michelin-starred restaurant Costes moves into the famous Budapest Eye ferris wheel amid the continuing threat of the coronavirus pandemic. —REUTERS

BUDAPEST—Hit by a plunge in turnover after foreign tourists vanished, Michelin-starred Hungarian restaurant Costes has staged a skyline dining event on the Budapest Eye ferris wheel to generate sales in a coronavirus-proof environment.

Costes owner Karoly Gerendai said turnover at one of his reopened restaurants was down to about a tenth of prelockdown levels, forcing him to look for new ways to do business.

“Now that there are not many people either on the wheel or in the restaurant because there are no tourists, the opportunity arose that we could do this,” he said of the event at the landmark attraction in central Budapest.

“It is now especially important for people to be able to be separate from other guests to be safe, and the ferris wheel is ideal with its separate cabins.”

As of Sunday, Hungary had reported 46,290 COVID-19 cases with 1,142 deaths and the economy heading toward a 5-7 percent contraction this year.

Tickets for the novel Costes dining experience cost up to 48,000 forints ($154.40) each for a four-course meal and sold out within days, Gerendai said, as affluent local clients sought a rare escape from the constraints of coronavirus restrictions.

Gerendai is planning to repeat the event when warmer weather arrives in the spring, though the cooler October night was no deterrent for customers on Saturday.

“We wanted to get out a bit and enjoy an experience again because we have been living quite closed in,” said Szabolcs Balazs, who took the meal with his wife and two children.

“We used to go to restaurants quite often; we have been to two Michelin-starred ones, but because of COVID we stopped going. So this is the only chance for us now because here we are really separated.”

Read Next
Talisay City left with only 7 active COVID cases