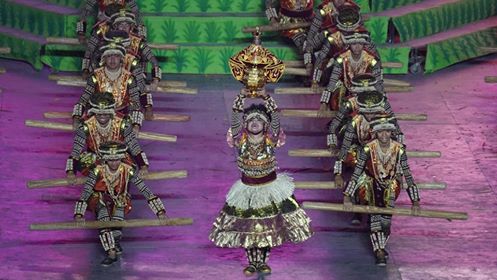 CEBU CITY, Philippines — The Sinulog Festival in 2021 may have fewer crowds due to quarantine restrictions, but it is expected to draw a wider digital audience as the activities will be broadcasted on air and online.

Instead of showdowns, the Sinulog Foundation Incorporated (SFI) and the Cebu City government, have decided to conduct all major activities online.

Only half of the usual number of performances will be dancing on the stage with handheld props. No backdrops, wheeled-in props, and other props that require propsmen can be used on stage.

Most likely, performers will be wearing masks as well as it may not be possible to maintain social distancing during their dance routines.

A short parade will be held at the vicinity of the venue, but immediately after their performance on stage, the participants will be brought home.

So far, international contingents from Portugal, Korea, and the United States, have signified their intention to join the virtual grand showdown.

The Sinulog Idol and the Festival Queen competitions will also be virtual events with minimal to no audience allowed. The group performances will be recorded live to avoid crowding.

The Balik Cebu program, which aims to welcome incoming Overseas Filipino Workers (OFW) will continue next year but will follow the schedule set by the regional Interagency Task Force since there will be an expected decrease of arriving tourists due to the pandemic.

The Cebu Carousel will be a set of stalls, three-dimensional pop-ups, and exhibits that will be lined along Osmeña Boulevard leading to the Fuente Osmeña Circle featuring the different tourist spots, festivals, delicacies, and culture of participating local government units (LGU) in the Cebu Province.

The Carousel will be in coordination with the Department of Tourism (DOT) and the Cebu Provincial Government.

The Pyrotechnics Contest will be held in an area where most of the people can see so that Cebu City residents will not have to go out far to see the show.

“Our goal is to provide our residents with a festive mood despite not having a grand parade to look forward to. When they go to work or go home, they will pass through the Cebu Carousel and enjoy the 3D sceneries,” said Elmer “Jojo” Labella, the executive director of SFI.

Vice Mayor Michael Rama, who has been delegated by Mayor Edgardo Labella to organize the Sinulog 2021, said that the goal is to deliver the festival to the homes of the Cebuanos without them going to see the events live.

“We have to be innovative because the health of our people is the priority,” said the vice mayor.

As the activities for the Sinulog 2021 has been set, the city government and the SFI has at least two months to implement this virtual festival.

Rama said there is enough time for the planning and execution as the logistics are minimized by making the events virtual and online. /rcg