MANILA, Philippines — A dog is trapped on a rooftop on Thursday as floodwater submerged houses in Nangka, Marikina City following heavy rains brought about by Typhoon Ulysses.

In a photo shared by Katleen Bascos on Facebook, a labrador dog named Bruno could be seen stuck on a rooftop as floodwater surrounded him. 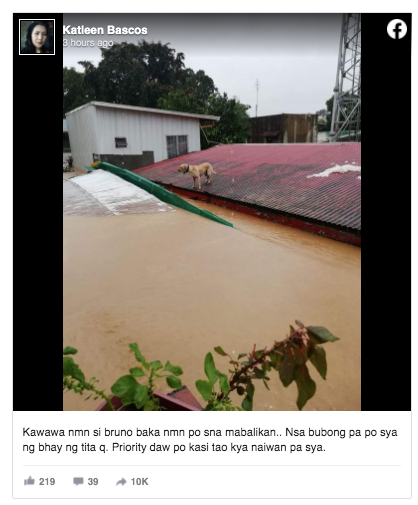 (Maybe the dog can be rescued. He is still on the rooftop of the house. People were prioritized in the rescue so the dog was left behind.)

In a phone interview with INQUIRER.net, dog owner Winona Sta. Maria said their dog Bruno was left behind when they were rescued because people were prioritized.

As of writing time, the dog is still on the rooftop, waiting to be rescued.

Sta. Maria said that when the waters started to rise, she, her mom, and her sister were the first ones to be rescued by authorities.

She said authorities were first reluctant to rescue the dog as they are prioritizing people. This forced Sta. Maria’s dad to be left behind so that he could accompany their dog.

It was after seven hours before authorities came back to rescue Sta. Maria’s father. The dog, however, was left behind.

With her voice slightly breaking, Sta. Maria lamented how they thought they would never again see the light of day because of what happened to them during this crisis.

She said they were not able to save most of their things aside from their to-go bags.

She recounted how some of the rescue teams passed them by as they were prioritizing children and senior citizens.

She added that she felt sad for her dog, as well to other dogs in their neighborhood who were left behind, some of which are even left tied to posts.

She is calling for authorities for the rescue of her dog. She said her dad is willing to go back to their house, along with rescuers, to fetch the dog.