Nothing to shout about: Olympic fans may face cheering ban 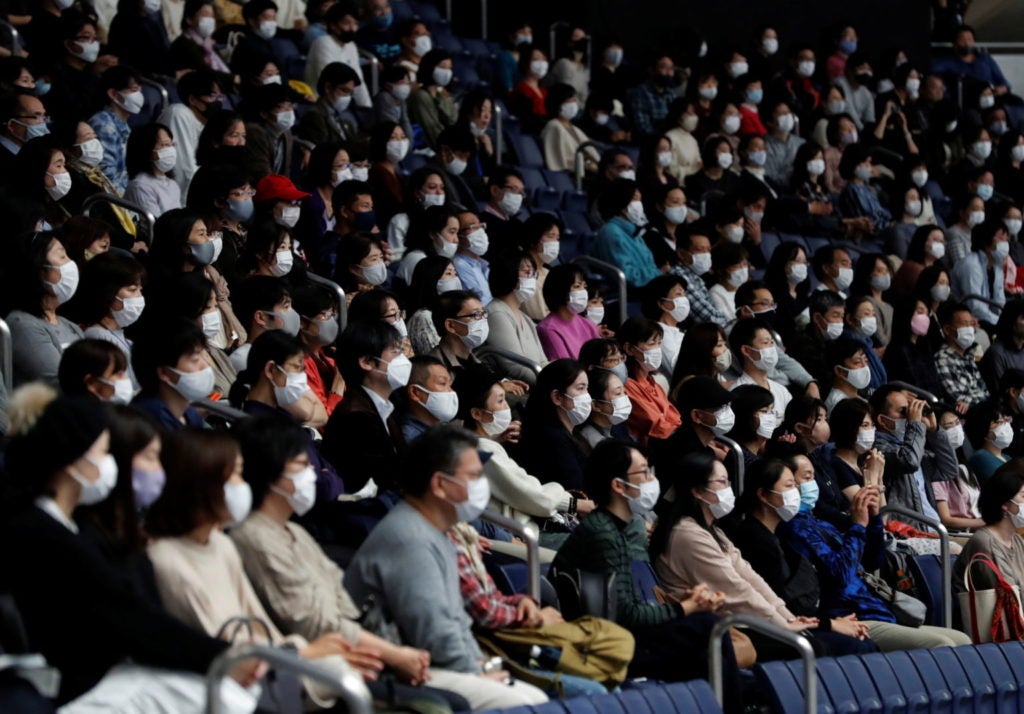 FILE PHOTO: Spectators wearing protective masks watch athletes’ performances at Friendship and Solidarity Competition, the first international event at a Tokyo Olympic venue since the Games were postponed in March due to the coronavirus disease (COVID-19) pandemic, in Tokyo, Japan November 8, 2020. REUTERS/Kim Kyung-Hoon

Fans may be asked not to cheer at the Tokyo Olympics to avoid the risk of spreading the coronavirus, a top official said on Thursday.

The comments follow a gymnastics test event in Tokyo on Sunday where mask-wearing spectators, urged not to shout or cheer, confined themselves to polite applause and murmurs of approval.

Tokyo 2020 chief executive Toshiro Muto said fans arriving in Japan may be spared a mandatory two-week quarantine, saying it would be too hard to enforce.

But he said officials were also considering urging fans not to shout or talk loudly, to minimize the risk of COVID-19 infections at the postponed 2020 Games.

“There’s a possibility that we might ask the (Olympic) spectators to refrain from shouting or talking in a loud voice,” Muto said after a committee meeting.

“When we think of the impact, we believe it is an item for consideration, to reduce the risk of airborne droplets.”

However, Muto added that the “practicality and feasibility” of clamping down on cheering needed to be considered.

While sports competitions around the world have resumed after shutting down for the pandemic, most are taking place behind closed doors.

Fans are allowed at sports events in Japan, usually in limited numbers, but they are advised not to shout and cheer.

International Olympic Committee president Thomas Bach, who will visit next week, on Wednesday said he was increasingly confident that a “reasonable number” of fans will be allowed at the Games.

Muto said officials were considering waiving quarantine for arriving fans and replacing it with a series of tests and health checks.

Athletes’ and officials’ movements will be heavily restricted for two weeks after they enter the country, but this is difficult to implement for fans, he said.

“As the number of foreign spectators is so high, 14 days of quarantine and a ban on public transport use is unrealistic,” he told reporters after a committee meeting.

Instead, “pre-visit tests and health monitoring, careful screening at the border, post-entry checks on activities and health, (and) taking swift measures if symptoms appear” are among the measures being considered.

The Olympics were delayed for a year to next July by the coronavirus pandemic but despite a rising caseload worldwide, the outlook is brightening for the Games.

Olympic chief Bach, whose visit next week will be his first since the Games were delayed, said the events were a positive sign.

“Having seen the different tests in Japan, we can become more and more confident that we will have a reasonable number of spectators also in Olympic venues,” he said after an IOC executive board meeting.

“How many and under which conditions, it will… very much depend on future developments.”

Japan currently has a strict ban on practically all in-bound foreign tourism. Muto said any cap on the number of spectators, or rules for visiting crowds, would be decided in the spring.

At Sunday’s gymnastics competition, around 2,000 fans in face masks remained socially distanced at an 8,700-capacity Olympic venue, while being encouraged not to shout.