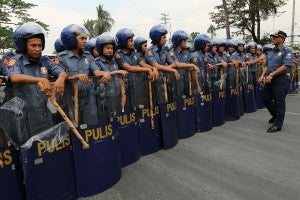 15 police personnel from the Tuburan Police Station tested positive for COVID-19 resulting in the temporary closure of the facility.

DUMAGUETE CITY, Negros Oriental — Another Police Station under the Cebu Police Provincial Office (CPPO) was closed temporarily after some of its personnel tested positive for COVID-19.

The Tuburan Police Station is now closed after 15 of its personnel were found positive for the virus following a swab test that was done last Thursday.

As of the moment, augmented personnel and those who were not in close contact with the 15 positives are temporarily working outside the station where they set up a tent to accommodate those who will be seeking their services.

Police Lieutenant Colonel George Buyacao Jr., the commander of the station, in a phone interview, said that they are making sure that they are still able to function despite half of their personnel are now under isolation.

“We have to continue our public services it should not stop,” said Buyacao.

According to Police Colonel Alladin Collado, the director of CPPO, most of the 15 personnel who tested positive were assigned in the cemeteries during the last few days for the Kalag-kalag 2020 before they underwent swab testing.

He said they might have gotten the virus from this activity.

The Tuburan Police Station is the second CPPO police station to temporarily close behind Minglanilla Police Station whose commander tested positive on Wednesday.

Police Brigadier General Abert Ignatius Ferro, director of Police Regional Office in Central Visayas (PRO-7), said that the personnel will be taken care of and necessary augmentation will be done so police work in the town will remain unhampered.

“Our Regional Health Service has been going around checking our people. The same strategy that we have done. We will isolate them, we will take care of them. If necessary, we will lock down the police station,” said Ferro. /rcg

Read Next
The Colors of Christmas at SM Home