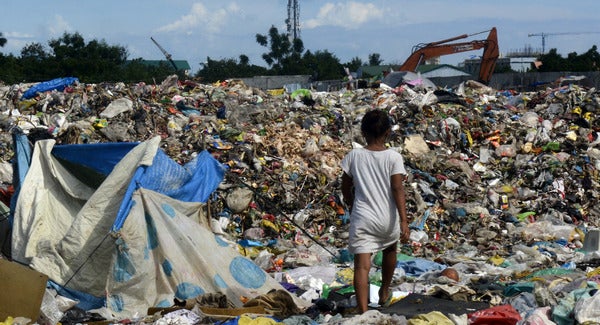 Dumpsite kids scour mounds of garbage for anything that they could sell. (CDN PHOTO/CHRISTIAN MANINGO)

The city administrator confirmed that there is a proposed JVA from New Sky Energy Philippines (NSEP) currently under negotiation with the Joint Venture Selection Committee (JVSC).

The proposal is still far from approved, an indication that the city government is carefully treading their ground on the proposal, which has already garnered objection from environmental groups.

The No Burn Pilipinas conducted a picket rally outside the Cebu City Hall Legislative Building on December 9, 2020, protesting this JVA proposal and urging the city government to turn it down.

Casas said one of the concerns of the JVSC is the location of the proposed WTE facility y as the city government, including the City Council, insisted that the company must be the one to look for a viable place for the facility.

(Right now, they are looking for a place. What Cebu City wants is that we won’t be burdened with where to place the facility. The obligation to look for the lot should be on account of the New Sky Energy. That is why our negotiations are not yet over.)

The city administrator assured that the company will be required to get all the necessary permits from the Department of Environment and Natural Resources (DENR), Department of Energy (DOE), and other regulatory agencies of the national government.

He clarified that incineration technology in modern times has evolved to have less impact on the environment than before and can already be a solution to the perennial problem of garbage.

He reiterated the need for a WTE facility in Cebu City as there is no longer an operational landfill within the city’s jurisdiction and outsourcing the disposal of garbage to a private firm is costing money that could have been used for social services.

Despite this “necessity,” Casas said that Mayor Edgardo Labella specifically instructed the JVSC to scrutinize this proposed JVA and ensure that should the city undertake the project, it will be for the best interest of the present and future generations. /rcg