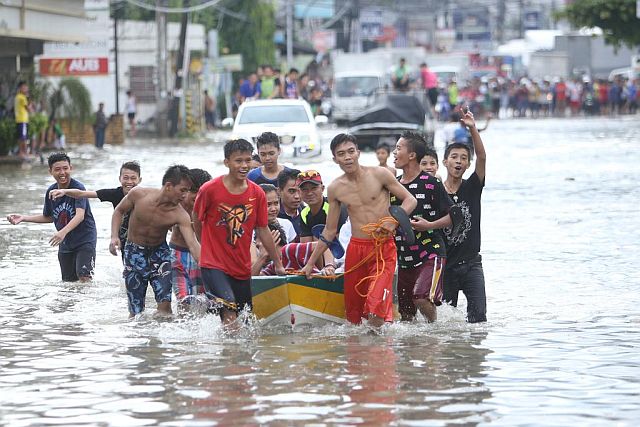 Residents in A.S. Fortuna St., Mandaue City use a makeshift boat to ferry stranded people through the flooded area. The city’s disaster agency is now on red alert in preparation for TD Vicky. CDN PHOTO/LITO TECSON)

MANDAUE CITY, Philippines – The Mandaue City Disaster Risk Reduction Management Office (MCDRRMO) is now on red alert status as signal no. 1 was raised over central and southern Cebu due to Tropical Depression Vicky.

The CDRRMO is strictly monitoring the river eye, to monitor the abrupt rise in the rivers’ water level.

Buddy Alain Ybañez, head of the city’s DRRMO, said they have already instructed all village chiefs to trim tree branches near the streets and houses to prevent branches and leaves from falling on electric wires and roofs.

He said pruning branches and leaves would also prevent the possible falling of trees along roads when strong winds hover, which would make roads impassable.

Barangay gymnasiums and schools are also being prepared as evacuation centers.

Ibañez said the city will conduct forced evacuation if there will be an abnormal rise in the water level in the rivers.

An estimated 300 families are living along the city’s rivers. /rcg