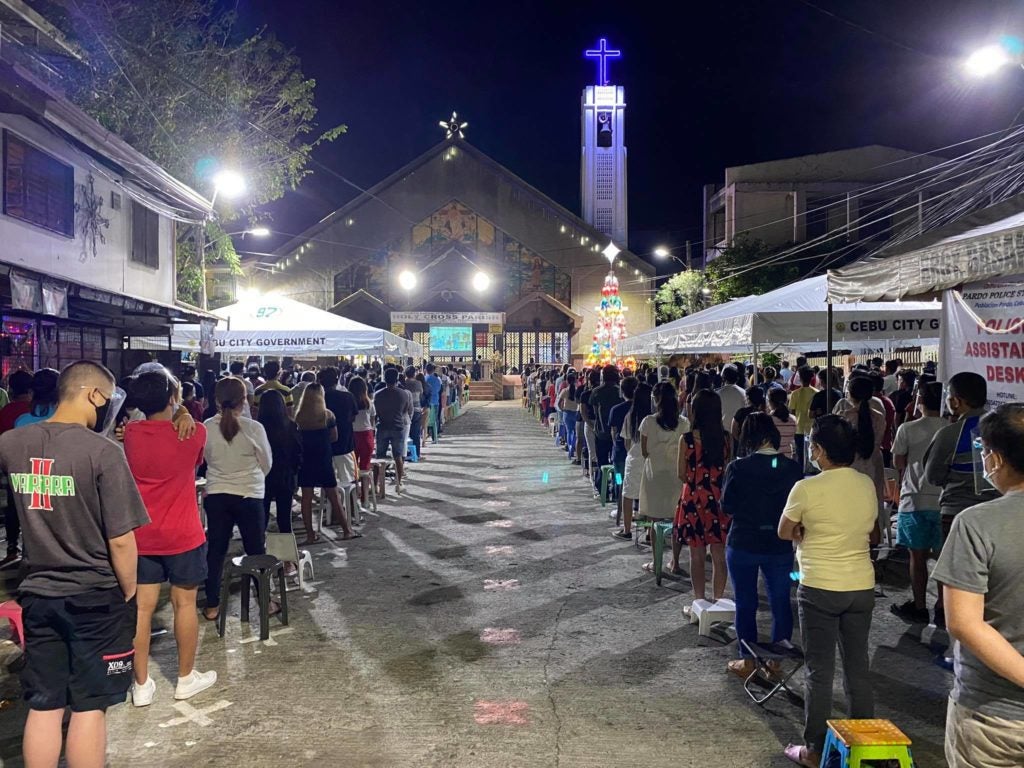 On the 5th day of the Misa de Gallo, enforcement of minimum health standards has improved among the crowd gathered outside churches in Cebu City. | Photo courtesy of Councilor Joel Garganera

This prompted authorities to decide on the need to deploy Kaohsiung buses near churches for use as transportation of minors and elderlies who will not be allowed to attend the dawn Masses and will have to be sent back home.

“We will be fielding Kaohsiung busses starting tomorrow (December 21) to transport these minors back to their barangays, for families bringing minors, toddlers or babies (since they are not) allowed to enter the church premises,” said Councilor Joel Garganera, heads of the city’s emergency operations center (EOC).

Parilla said they are initially eyeing to place the buses within the vicinity of the Cebu Metropolitan Cathedral and the St. Nicolas de Tolentino Parish Church.

“We have observed that there are quite a number of minors below 15-years-old who do not even attend daw Masses but are instead playing near these churches. They’re not supposed to be outside their houses,” said Parilla in Cebuano.

Meanwhile, Garganera said he has observed that more Cebu City residents are now compliant with minimum health standards. He added that road closures implemented by the police were effective in ensuring strict crowd control.

“The closure of roads within the church premises and not allowing cars to park in the parking space of the church during the mass really provide ample space for churchgoers,” said Garganera.

“The putting up of extra sound system and video screen also helped,” he added.

The city government allowed the conduct of Misa de Gallo and Simbang Gabi but subject to several conditions, which include the strict enforcement of health protocols such as imposing an age limit for attendees.

The nine-day series of dawn Masses kicked off last December 16. But despite earlier warnings and advisories from authorities, throngs of people were seen crowding churches with little or no regard to physical distancing.

This prompted both the local government officials and police to impose additional measures if this would mean ensuring that health minimum standards will prevail.

Parilla, on Sunday, said they have assigned 50 more personnel, particularly at the Basilica, to help enforce protocols.

There are at least 35 churches in Cebu City that hold Misa de Gallo. / dcb