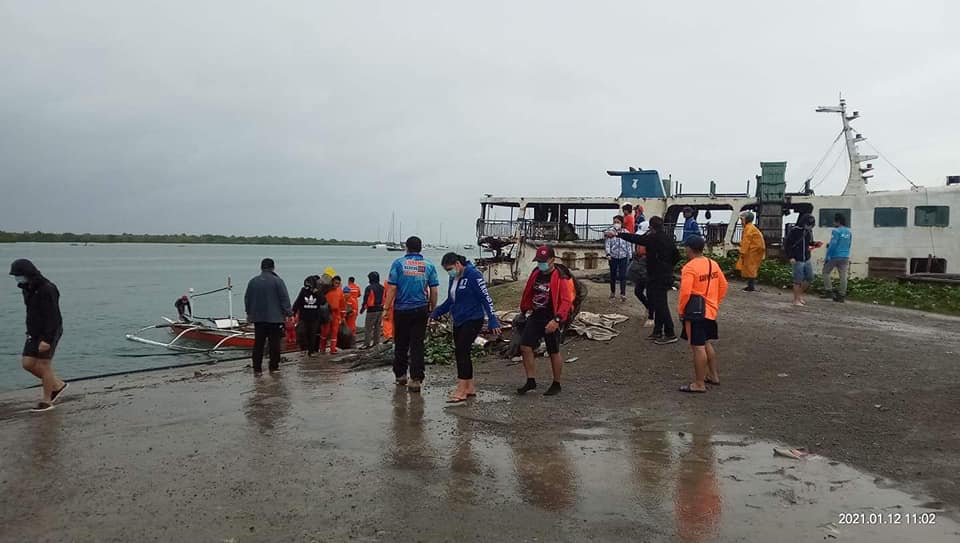 Some of the passengers who were rescued from LCT Manoling 2 that ran aground in Danao City arrive at the Danao City port on Tuesday, January 12, 2021. | Photo Courtesy of Danao City Disaster Risk Reduction and Management Office

CEBU CITY, Philippines — Some of the passengers and crew members of LCT Manoling 2, a ship that ran aground off the coast of Danao City, have yet to be rescued due to bad weather.

LCT Manoling 2, a cargo ship, left Isabela, Leyte at 6 a.m. on Monday, January 11, 2021, headed for Danao City in northern Cebu. It ran aground near Barangay Dunggoan in Danao City at around 8 p.m. on Monday.

The Philippine Coast Guard (PCG) Danao City Station has yet to investigate if the ship sustained damages as their priority was to rescue all passengers first. The PCG has also not revealed the reason as to why the ship ran aground as of this posting.

Ensign Edzel Gonzaga of PCG Danao City told CDN Digital that at least 26 passengers and all of the ship’s crew members are still on the ship as of 4 p.m. on Tuesday, January 12.

Gonzaga said they have successfully rescued at least 27 of the passengers since Tuesday morning but bad weather made it difficult to continue rescue operations.

(The waves are too huge for our small wooden boats and the area where the ship ran aground is shallow that we can’t send in the larger rescue boats.)

The passengers, still stranded about 500 yards, or almost half a kilometer away from the port, are in good health as reported by the crew of the cargo ship. The PCG said they were given food and other necessities while they remain at sea.

Since the passengers were bound for Danao City, those who have earlier been rescued already decided to go home or to continue to their local government unit (LGU) of destination. Only those with cargo or vehicles on board the are waiting for the ship to be able to dock.

The ship carried with it a total of 53 passengers, 25 crew members, and 22 rolling cargoes.

Read Next
Road closures to stay despite no Basilica masses — EOC