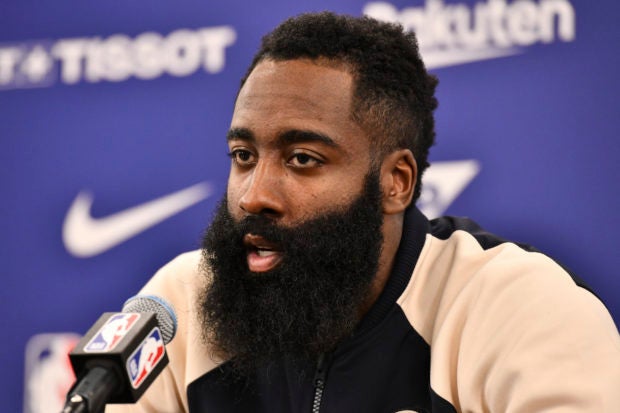 In this file photo taken on October 10, 2019 Houston’s guard James Harden answers a question after the NBA Japan Games 2019 pre-season basketball match between Houston Rockets and Toronto Raptors in Saitama, northern suburb of Tokyo. – James Harden said on January 15, 2021 that he is confident of fitting in alongside new Brooklyn Nets team-mates Kevin Durant and Kyrie Irving after completing his blockbuster trade from the Houston Rockets. (Photo by TOSHIFUMI KITAMURA / AFP)

NEW YORK   – James Harden said Friday he is confident of fitting in alongside new Brooklyn Nets team-mates Kevin Durant and Kyrie Irving after completing his blockbuster trade from the Houston Rockets.

The eight-time All-Star stunned the NBA this week after completing a move to the Nets after an acrimonious end to his time in Texas.

Harden’s arrival in Brooklyn has sparked talk of a new NBA superteam, with the Nets now looking to challenge the recent dominance of the Milwaukee Bucks in the Eastern Conference.

However, several commentators and former players including Shaquille O’Neal and Charles Barkley, have questioned whether Harden will be able to work harmoniously with Durant and Irving.

Harden dismissed those concerns on Friday in his first remarks to reporters since completing his trade.

Asked why he thought the mix would be a success, Harden replied: “Chemistry, sacrifice and we’re all elite.”

“We’re all unselfish, we’re all willing passers and we play basketball the right way. That’s all that matters.”

Harden cautioned though that his arrival was no guarantee of a title.

“I think for me, giving myself a chance (of a title) is very important,” Harden said. “It’s not going to be easy, but with this roster and this coach and this organisation I think we have a chance.”

Harden meanwhile defended the tirade earlier this week which prompted his rapid exit from the Rockets.

The 31-year-old incensed his Houston team-mates after telling reporters he did not believe the team was good enough to challenge for a championship.

“I wasn’t disrespectful to anyone,” Harden hit back on Friday. “Some of those guys had just got there, and I’d been there for a very long time.

“I’d been through all the ups and downs. I wasn’t disrespectful. I just made a comment that the team wasn’t good enough to compete for a title.”

“These guys want to win,” Nash said. “And if they really want to win, they’ll find a way to play together. I think my role as coach is to create an environment that is really, really enjoyable, challenging and competitive but fun.

“If you can put those elements in the mix every day, I don’t think the personalities are going to be a challenge.

“It’s really about how much these guys want to sacrifice to become an efficient unit. And if they’re willing to do that, it doesn’t really mater who brings up the ball up the court.

“It’s about how they play together and how willing they are to work and make each other better.”

NBA pundit Barkley also wondered whether Harden or Irving would be ready to sacrifice personal glory for the good of the team.

“The only one of those three guys who has proven to me that he’s not selfish and not a ‘me’ guy is KD (Kevin Durant),” Barkley said.

“James Harden and Kyrie Irving have never shown me, ‘I just want to win. That’s the most important thing.’ KD, he’s unselfish. The other two guys, they just care about their numbers, and I don’t think they’re going to make the sacrifice. They’re going to get less shots.

“Are those two guys going to say, ‘You know what, I’m just going to play hard and play defense and not worry about my individual numbers’? To me, that’s a hell, no.”