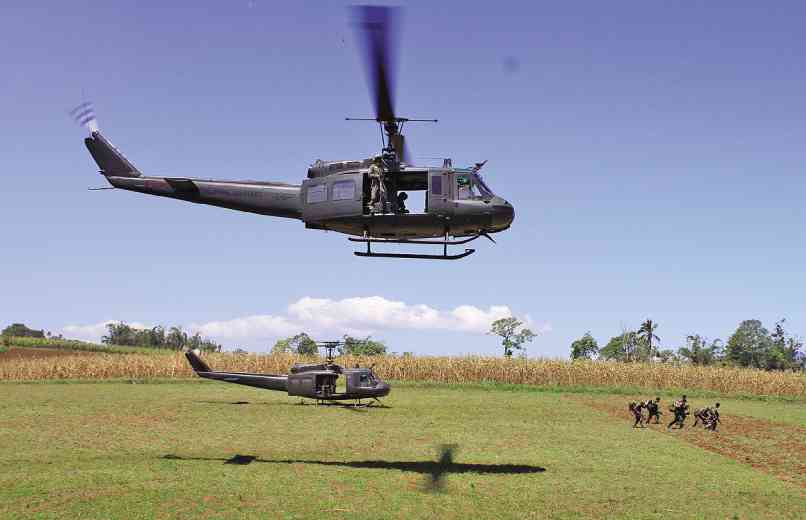 MANILA, Philippines — President Rodrigo Duterte is eyeing to retire all of the UH-H1 “Huey” helicopters being operated by the Philippine Air Force (PAF), following fatal crashes.

(Do we still have plenty of those Hueys? Are there more left? No, I want them replaced. It’s past its time. Even if you say they are well maintained.)

“Bibili ako ng mga helicopters, at saka puwede pa naman natin remedyohan sa Bisaya. Eh kung may remedyo diyan, if it can be remedied, we will,” he added.

(We will buy helicopters. If it can be remedied, we will.)

Duterte, however, said that he was not making any “hard promises,” but assured that he will try his best to look for the budget to replace the helicopters.

On Jan. 16, seven soldiers were killed when their UH-H1 chopper crashed in a rice field in Malaybalay City, Bukidnon.

This incident was said to be the fourth Air Force helicopter to crash in six months. Of the helicopters that crashed, three were Hueys.

The Armed Forces of the Philippines (AFP) has an existing procurement program to modernize the helicopter fleet of the Philippine Air Force. Recently, it commissioned the first six of 16 Polish-made Sikorsky S-70i Black Hawk helicopters ordered in 2019.

The remaining 10 Black Hawk units are expected to be delivered within the first quarter of 2021, according to Defense officials. /rcg