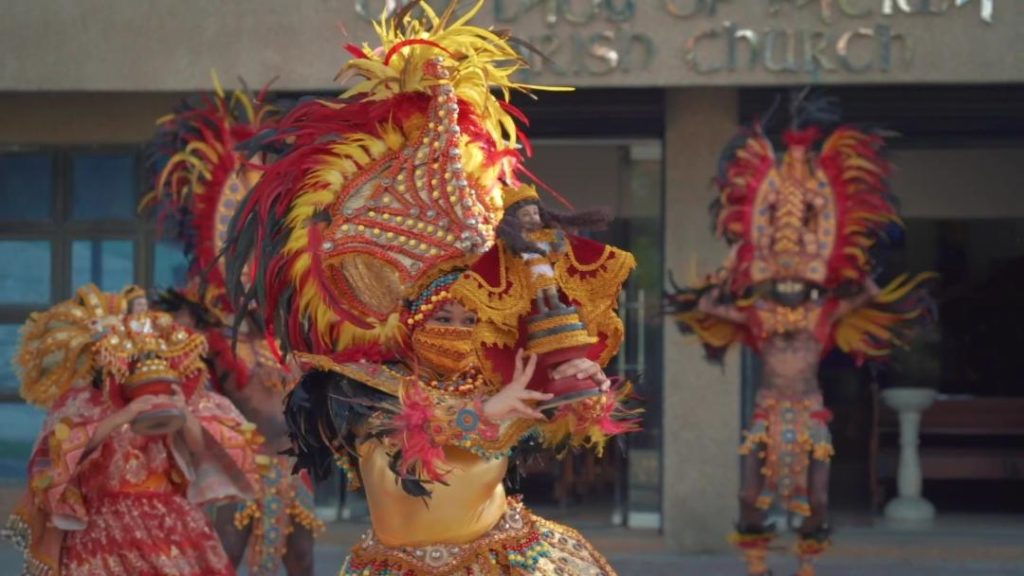 In the video production, seven Ati tribes each performed on location in the city’s seven geographical districts, depicting historical landmarks and structures and traditional industries.

Instead of a contest of various Ati tribes performing along the streets of the city in a carousel-type parade, tribe organizers, performers, choreographers, designers and filmmakers collaborated to organize seven tribes which performed in front of churches, old mansions, along the Iloilo River and Iloilo Promenade, and even on a building rooftop to show the economic boom that the city experienced in recent years. The tribe members, which had to train and perform under a COVID-19 bubble as part of health measures, wore the trademark striking colors of Ati tribe warriors of the festival.

On Friday, a motorcade of Sto. Niño images passed the seven districts of the city.

The motorcade was in lieu of the traditional fluvial parade so that the faithful and spectators would not converge at the San Jose Parish church at the city center.

On Saturday, Ilonggos and those who have attended previous street-dancing events posted photographs on social media for the virtual Dagyang sa Calle (street merrymaking). The video presentation also paid tribute to frontliners of the pandemic especially those who have been part of the festival in the past years.

“The Dinagyang Digital 2021 is one of the best Dinagyangs in our festival history. Despite the strict health protocols being followed by everyone due to the pandemic, we showed the whole world that Ilonggos are one as we celebrate the biggest feast of the city, the feast of our patron saint, Senor Sto Niño,” Iloilo City Mayor Jerry Treñas said in a statement.

Treñas said the holding of the digital festival amid the pandemic was also to show gratitude to the Sto. Niño “for all the blessings He has bestowed on us in the face of adversities.”

“The COVID-19 pandemic may have altered our plans and changed our way of life but our faith as Ilonggos has remained intact,” he said.

Held every fourth Sunday of January, the festival traces its origin to 1968 when Fr. Sulpicio Enderes, OSA, with a delegation of the Cofradia de Cebu, brought a replica of the image of Señor Sto. Niño de Cebu to Iloilo City. The image was brought to San Jose Parish Church where it is enshrined until now.

In 1969, the first parish feast of Señor Sto. Niño was celebrated to commemorate the event. The champion and runner-up in the Kalibo Ati-Atihan in Aklan contest performed in what is considered the first Ati-Ati festival in Iloilo City.