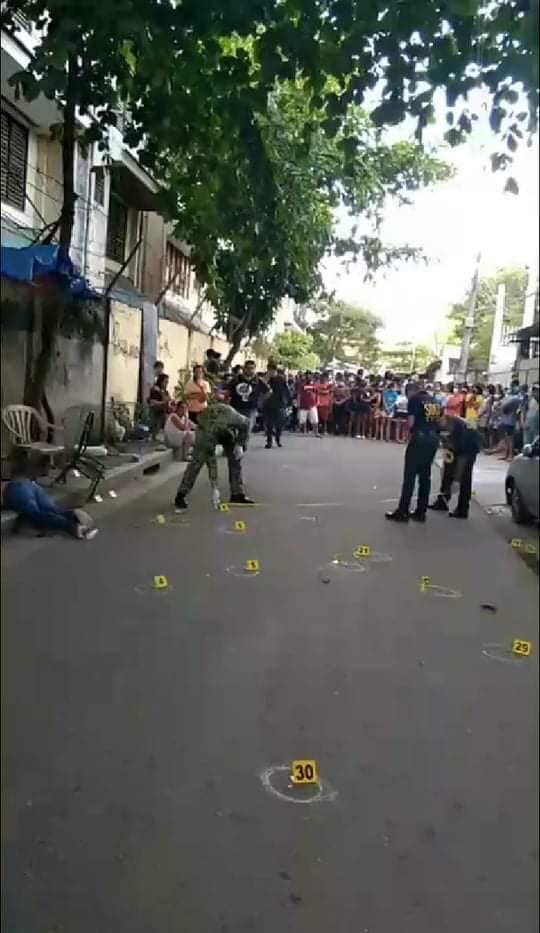 Cebu City policemen process the crime scene where a policeman was shot dead by unidentified motorcycle-riding gunmen in Barangay Labangon, Cebu City at past 3 p.m. of Jan. 25. | via Paul Lauro

CEBU CITY, Philippines — Police are investigating if the motive in the killing of a policeman by motorcycle-riding gunmen on Jan. 25 in Barangay Labangon, Cebu City is work-related or is due to a personal grudge.

Police Corporal Rodel Demaangay, who was assigned to the Autonomous Region in Muslim Mindanao (ARMM),  died after he was shot several times by the motorcycle-riding assailant at past 3 p.m. on Jan. 25, said Police Captain Jonathan dela Cerna, Labangon Police Station chief, in an initial report of the shooting.

Dela Cerna said that Demaangay, who was believed to be from Sitio Bonbonan of the same barangay, was identified by his wife and his relatives, who rushed to the area after they heard about the shooting.

Dela Cerna said that they were looking at these two possible motives in the fatal attack on Dela Cerna — whether this was related to his work or was due to a personal grudge.

He also said that they were also checking the background of the victim and why he was in Cebu when he was supposedly assigned to Mindanao.

Dela Cerna said that the victim’s wife allegedly told him that her husband had been in Cebu since September.

As of this posting, police were still trying to identify and arrest the assailants in the killing of Demaangay./dbs

Read Next
Hit-and-run driver, who killed cyclist, nabbed in Talisay