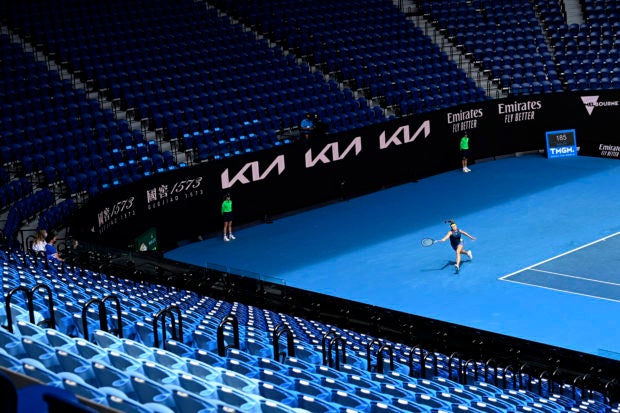 This is the general view during the third round match between Czech Republic’s Karolina Muchova and Czech Republic’s Karolina Pliskova at the Australian Open at Melbourne Park, Melbourne, Australia, on February 13, 2021. The tournament continues without crowds today after the state of Victoria was placed under a snap lockdown from Friday to contain a fresh outbreak of the coronavirus disease (COVID-19) REUTERS/Jaimi Joy

MELBOURNE – The sixth day of the Australian Open is usually one of the best attended of the Grand Slam fortnight but there was an eerie quiet around the Melbourne Park precinct as play got underway on Saturday.

A snap five-day lockdown to try to contain an outbreak of COVID-19 came into effect just before midnight on Friday, restricting Victoria’s six million residents to their homes and shutting fans out of the tennis.

Shops, bars and restaurants on the site usually teeming with fans were shuttered and the only noise was the mask-muffled chatter of those workers deemed essential — police, security guards, match officials and media.

Tennis players also fall into that official classification for the next five days in Melbourne and 20 of them got back to work in front of empty stands in two singles and four doubles matches on Saturday.

For the duration of the lockdown, the players will be transported between a Melbourne Park “bubble” and their residences, where they will endure the same restrictions as everyone else.

The players, perhaps aware of the backlash in the host city that followed some complaints about restrictions in the early days of their pre-tournament hotel quarantine, have accepted the lockdown with equanimity.

They still miss the fans, though. 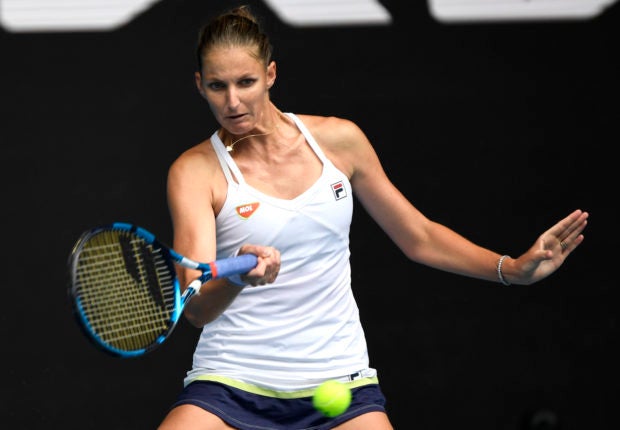 “I was so happy yesterday morning when I thought I would be playing in front of a big crowd,” Karolina Muchova said after her win on Saturday over Karolina Pliskova in Rod Laver Arena, which usually holds almost 15,000 fans.

“Unlucky now for five days but hopefully they will come back. It’s definitely better with fans.”

There was an anti-lockdown protest involving some 200-300 people outside the gates of Melbourne Park on Friday evening but most of the people of the city also appear to have accepted that the sacrifice is necessary.

“I’m a big tennis fanatic, so it’s bittersweet,” Desi Day told Reuters late on Friday. “I know that it has to happen, but at the same time I’m super disappointed.”

Organisers are hoping fans, albeit restricted to 25,000 a day, will be back in the stands from Thursday onwards for the semi-finals and finals.

Only one new locally acquired case was confirmed in the 24 hours to Saturday morning, Victoria health authorities said, taking the number of active cases in the state to 20.