LPA off Mindanao now a tropical depression; could be first storm of 2021 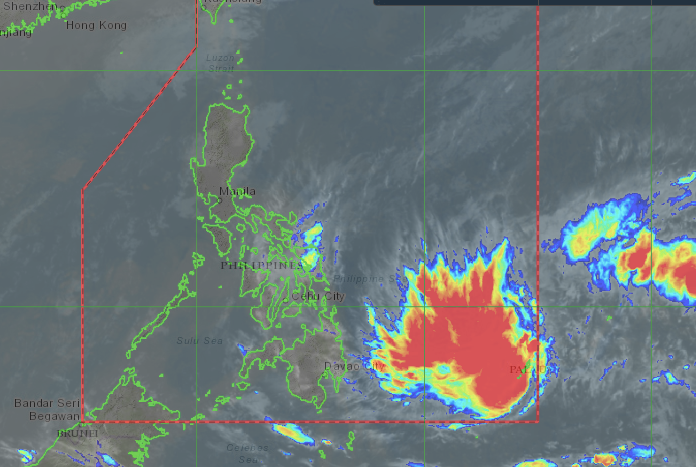 The tropical depression was spotted 1,070 kilometers east of Mindanao as of 3 a.m. and is packing maximum sustained winds of 45 km per hour and gusts of up to 55 kph, Pagasa senior weather specialist Shelly Ignacio said.

It is expected to enter the Philippine Area of Responsibility (PAR) in the next 12 to 18 hours, and will be the country’s first storm this year named “Auring.”

As of Wednesday, the tropical depression is not affecting any part of the country, but will affect a large part of Visayas and Mindanao once it enters PAR, Ignacio said.

Meanwhile, the tail-end of a frontal system will bring cloudy skies with scattered rainshowers and thunderstorms over Visayas, Caraga, Northern Mindanao, SOCCSKSARGEN and Zamboanga Peninsula.

Cloudy skies with light rains will also prevail over Cagayan Valley, Bicol Region, Aurora, and Quezon due to the northeast monsoon.

The northeast monsoon will likewise bring partly cloudy to cloudy skies with isolated light rains over Metro Manila and the rest of Luzon.

Meanwhile, the rest of the country will have partly cloudy to cloudy skies with isolated rainshowers or thunderstorms due to localized thunderstorms.

Pagasa warned of flash floods or landslides may occur due to severe thunderstorms.