Over 3,500 individuals evacuated in C. Visayas due to Auring 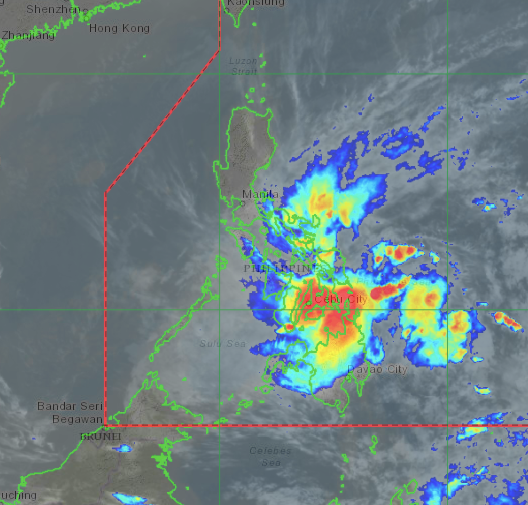 “Our current models show that Auring will make its first landfall between tonight (Sunday) and tomorrow early morning in the regions of Eastern Samar, Leyte, and Dinagat Island… Its eye may also pass the northern tip of Cebu on Monday morning after making its first landfall,” Jomar Eclarino, weather specialist of Pagasa-Mactan, said in Cebuano.

While it maintained its strength of 65 kilometers per hour (kph), with gustiness reaching up to 80 kph, state meteorologists noted that the storm has slightly accelerated, moving in a northwestern direction at 20 kph towards Dinagat Islands, Leyte, and Eastern Samar.

Cebu remained under Tropical Cyclone Warning Signal (TCWS) No. 1 on Sunday afternoon, and would likely persist until Monday, Pagasa-Mactan noted.

But before Auring can even hit land, massive flooding has been reported in several provinces in Mindanao, particularly in Surigao del Sur and Surigao del Norte.

Auring is also expected to cross the Visayas region.

Pagasa-Mactan said there is a possibility that the storm would hit and pass the northernmost tip of Cebu on Monday morning.

But, on the other hand, they are also monitoring the likelihood that Auring would not directly affect Cebu.

“Our latest track also showed an increasing likelihood that the storm’s center will not directly pass or hit the northern tip of Cebu. Our cone of uncertainty remained wide. We are not ruling out any possibilities as of this moment,” Eclarino explained.

As of Sunday, data from the Department of Social Welfare and Development in Central Visayas (DSWD-7) recorded at least 1,173 families or 3,565 individuals from 35 barangays subjected for preemptive evacuation from the provinces of Bohol and Cebu.

This translates to 60 evacuation camps being set up in various locations in both provinces.

Fortunately, the Provincial Disaster Risk Reduction and Management Office (PDRRMO) reported no casualties, injuries, and other untoward incidents related to bad weather as of Sunday.

PDRRMO, however, registered an increase in the number of individuals stranded from various ports in Cebu province as the Philippine Coast Guard (PCG) here has not yet lifted the suspension order for all sea trips.

Read: 304 passengers stranded after suspension of sea trips in Cebu

Six localities in Cebu have also conducted preemptive evacuations in which a total of 384 families were temporarily relocated to safer areas in anticipation of Auring.

These families are from Danao City, and the towns of Daanbantayan, Bantayan, Tuburan, Poro, and Madridejos.

Meanwhile, Pagasa-Mactan forecasted Auring to weaken into a Tropical Depression in the event that it will pass northern Cebu.

“This is because of the presence of high-pressure area, and vertical wind shear due to the surge of Amihan (northeast monsoon), all of which not only slows down a storm but can also ruin its circulation,” said Eclarino.

In the meantime, Pagasa-Mactan said the entire Cebu would continue to experience light to moderate rains, with occasional heavy ones, until Monday.

“We are urging the public to always be updated and monitor our weather advisories,” Eclarino added. /dbs