MANILA, Philippines — Pope Francis has named former Manila Archbishop Luis Antonio Cardinal Tagle as a member of an office in the Roman Curia that acts as the “Vatican’s central bank,” the Catholic Bishops’ Conference of the Philippines (CBCP) said Tuesday.

The CBCP, on its news website, announced that Tagle was assigned as a member of the Administration of the Patrimony of the Apostolic See (APSA), which, it said, “operates like the Vatican’s central bank.”

Tagle is currently the prefect of the Congregation for the Evangelization of Peoples, which is in charge of the Vatican’s missions.

“APSA acts as the equivalent of a treasury and also oversees real estate holdings and other sovereign assets.  Currently headed by Italian Bishop Nunzio Galantino, the office also administers payroll and operating expenses for Vatican City,” CBCP explained in a statement. 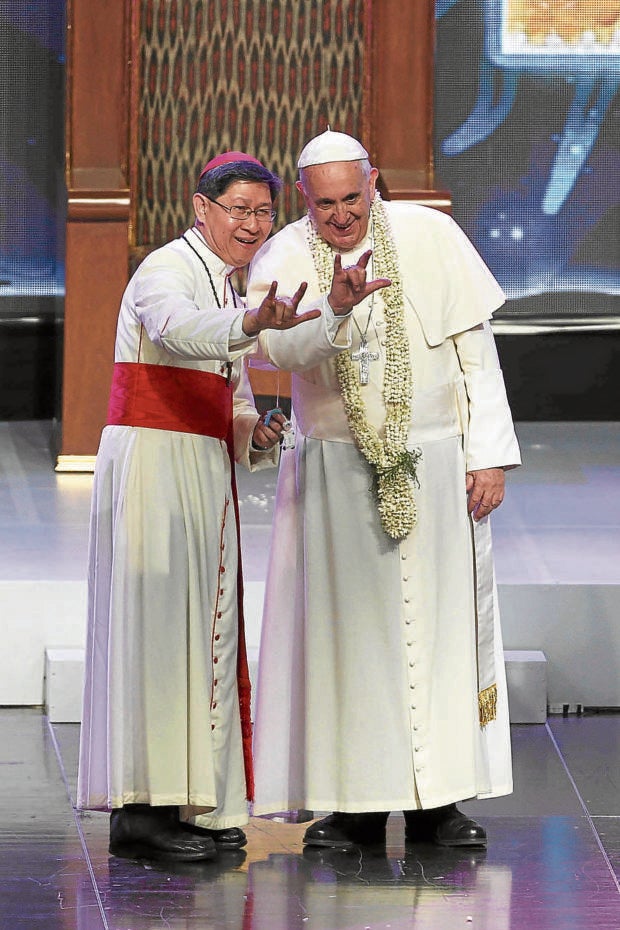 MEN ON A MISSION Cardinal Luis Antonio Tagle, then Manila Archbishop, with Pope Francis during the pontiff’s visit to the Philippines in 2015. INQUIRER FILES/EDWIN BACASMAS

The role at APSA is just one of the several hats that Tagle now wears aside from being a member of the Pontifical Council for Interreligious Dialogue and president of international Catholic charity confederation Caritas Internationalis.

Last May, Pope Francis elevated Tagle as a cardinal-bishop, the highest title that could be given to cardinals.

“APSA has around a hundred employees and collaborators, and a commission of eight cardinals who work alongside the president,” CBCP said.

“Pope Francis has recently brought under the control of APSA the financial investments and real estate holdings owned by the Secretariat of State — the central administration of the Vatican,” it added.