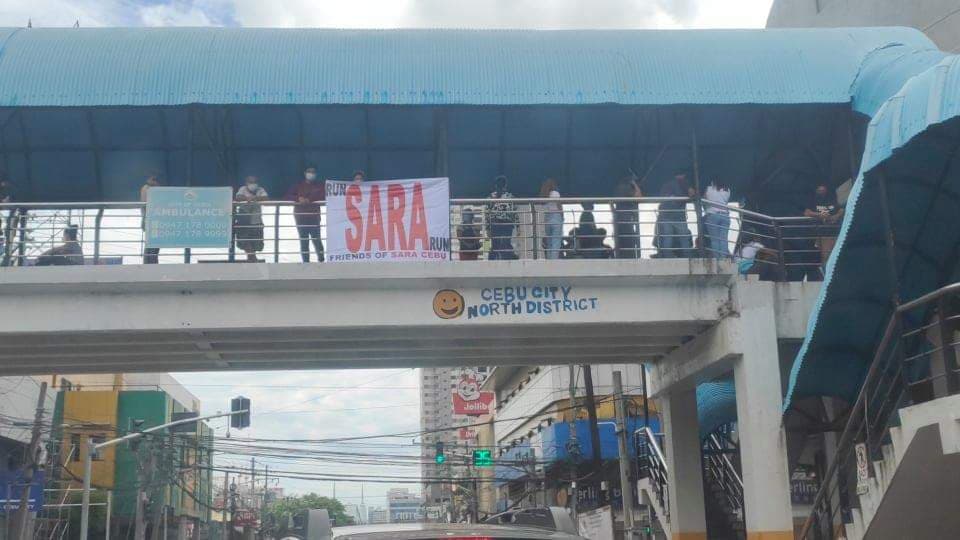 A tarp with a ‘Run Sara Run’ text hangs from one of the skywalks in Cebu City. | contributed photo

CEBU CITY, Philippines — The Commission on Elections (Comelec) in Cebu City is leaving it to the Local Government Unit (LGU) to regulate political banners put up around the city.

This developed after “Run Sara Run” banners were seen placed in skywalks in major thoroughfares here. These were recently taken down since it was found out that these had no permits from the city.

The banners were allegedly placed by supporters of presidential daughter and Davao City Mayor Sara Duterte-Carpio who want her to run for the top post in the 2022 elections.

Lawyer Marchel Sarno, the Cebu City North District election officer, said there was no violation incurred for putting up the “Run Sara Run” because technically, the election season has not begun.

No election violation can also be incurred on a non-candidate or an individual who is not yet an official candidate for the elections.

“If there are violations, it’s only with the local (government) on their ordinances,” said Sarno in a phone interview.

With this, any banners that may seem election-related as of this time cannot be sanctioned or ordered removal by the Comelec. However, the LGU can remove them in accordance to their policies and ordinances.

As long as the campaign period has not started, there will be no such thing as an “early campaign” by technical definition.

Still, since the election period is drawing near and the filing for political parties starting in March, the Comelec urges LGUs to regulate the posting of tarpaulins or posters around the city to prevent the city from being defaced by early campaigners.

Sarno said it is up to the Cebu City government to decide on this.

The Comelec already said that these sorts of early campaigning skew the playing field. It reminds the public to be prudent with understanding the messages of these political banners.

Also, Comelec Cebu City urges those who have yet to register to finally do so before the deadline on September 30, 2021.