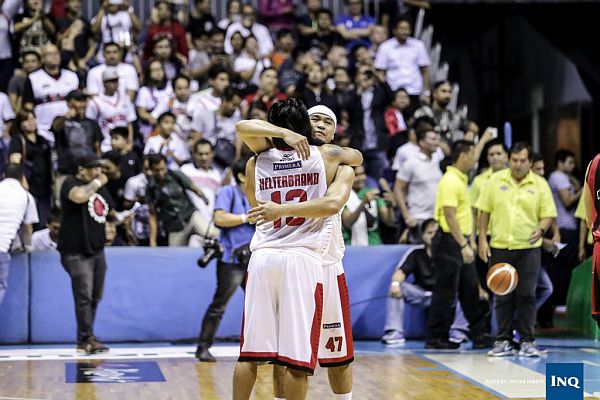 Ginebra’s “Fast and the Furious” Mark Caguioa (47) and Jayjay Helterbrand (13) celebrate their win bringing them to the finals of one of the PBA conferences in 2016. |Inquirer file photo

CDO Rafters’ owner Mogs Gonzales and Pilipinas VisMin Super Cup’s COO Rocky Chan formally sealed their partnership via a contract signing. The Rafters serves as the newest addition in the Mindanao leg’s line-up of teams. There are now five teams in the Mindanao leg, the Zamboanga Valientes, Pagadian Explorers, Sindangan, Roxas Vanguards, and the Rafters.

Helterbrand is best remembered as one of the best guards to ever play for the Barangay Ginebra Gin Kings. He was crowned PBA finals MVP in 2007 and back-to-back PBA Best Player of the Conference from 2008-2009.

Cawaling, on the other hand, was drafted 30th overall in the PBA by the San Mig Coffee Mixers, now known as the Magnolia Hotshots. Cawaling also played for Blackwater Elite and Kia Carnival.

Read Next
Rep. Radaza: My friendship with late Councilor Ycong beyond public service