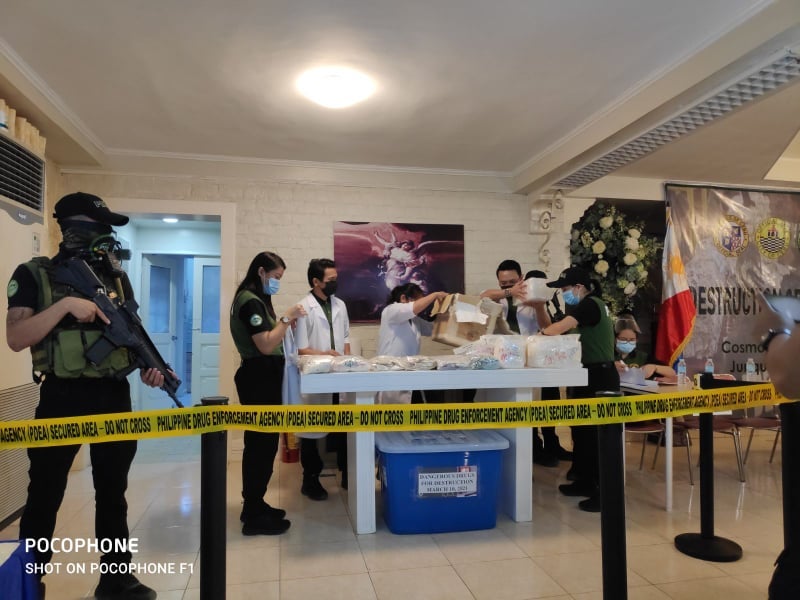 Authorities from PDEA-7 conduct final inventory on the P152 million worth of illegal drugs they confiscated shortly before these were destroyed on Wednesday, March 10, 2021. | Photo courtesy of PDEA-7

The Philippine Drug Enforcement Agency in Central Visayas (PDEA-7) burned down 22 kilograms of metahemphatamine (locally known as shabu), 28 grams of marijuana, and 4,229 tablets, 2,074 capsules, 12 ampules of other illegal drugs including nubaine and party drugs.

These prohibited substances were seized during PDEA-7’s recent operations, including the one last October 2020, wherein agents and police confiscated 21 kilograms of shabu during a raid in Lapu-Lapu City.

The tablets of party drugs, on the other hand, were seized from unclaimed parcels in Mandaue City, said Levi Ortiz, director of PDEA-7.

Ortiz said Wednesday’s destruction of illegal drugs was the largest to take place under his leadership.

(We want to show to the public that we are serious in our campaign illegal drugs. We are not hiding anything. We never recycle these drugs and other illegal activities.)

The PDEA-7 top official also said the court granted them clearance to destroy the drugs, which were used as evidence on cases filed against drug suspects they arrested.

(What we do is that when he have evidences at hand, and we get a Court order, we burn them.)

In the meantime, Ortiz said another disposal activity is expected as PDEA-7 is also processing documents for seized marijuana.