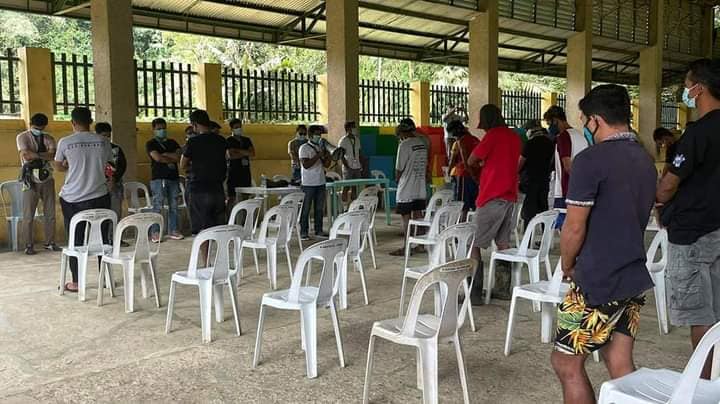 Illegal drug surrenderees in Cebu City undergo drug rehabilitation in preparation for a life away from crime. | Photo Courtesy of COSAP

CEBU CITY, Philippines — There remains a lot to be done to address the drug problem in Cebu City.

This was the statement of Mayor Edgardo Labella after the Philippine Drug Enforcement Agency in Central Visayas (PDEA-7) revealed that all barangays in the city are in some way or another, infected with illegal drugs.

In a phone interview, Labella said that the illegal drug presence in the city is a continuous problem that needs to be addressed through combined efforts not only of the police, the PDEA, and the city government, but also with the barangays and the community itself.

“We have been doing our share. Our police have been very relentless in this fight against illegal drugs. More is to be done yet because even though there are some barangays that have less drug prevalence, but of course, there are certain areas nga naa gihapoy drugs. I think the police is doing their job,” said Labella.

The mayor ordered the police to continue the relentless campaign against illegal drugs by cutting the supply chain, the first step a city-wide rehabilitation program.

Yet, he also ordered the intensified rehabilitation program of illegal drug users and pushers that would be the city’s long-term solution to the drug problem.

The instrument to this rehabilitation program is the city’s City Office for Substance Abuse Prevention (Cosap), which currently leads the rehabilitation of over 2,000 residents in the city.

COSAP head, John Jonah Rodriguez told CDN Digital that in the 80 barangays, the COSAP facilitates the rehabilitation of 1,300 drug surrenderers and 1,081 persons deprived of liberty (PDLs) with drug related cases, for a total of 2,381 individuals.

These individuals undergo a six-month program that would help them manage their drug addiction and provide them an opportunity to reenter society as a more functional individual.

Many barangays are getting better results from others with 1 or 2 out of a 100 rehabilitated individuals going back to illegal drug use, but others are more challenging.

Two barangays, which COSAP refused to name, has even showed non-compliance to the community-based program while other barangays are less enthusiastic.

This is a huge challenge as these barangays can often have the most infested areas in the city.

Rodriguez added that drug surrenders have a difficult time completing the program and tend to relapse in the middle of the program. This is why the COSAP and police are planning to visit these surrenderees to encourage them to persevere in the program.

One of the tactics that the city has done to encourage rehabilitation is to hire at least 50 successfully rehabilitated individuals to assist the drug surrenderees in the process because they are living testaments of a life away from drugs.

Even though they are seeing a rising number in the rehabilitated users, COSAP aims to take the program to the next level by targetting the pushers.

The agency plans, with Mayor Labella’s approval, to put up Bahay Silangan centers in the city, one in the mountain barangay and another in the urban barangays, where drug pushers can be rehabilitated.

The program does not only focus on the rehabilitation of a pusher’s drug addiction, but also to train the pusher in other skills and crafts that would help him find another form of livelihood outside a life of crime.

Rodriguez said this is part of the bigger plans of the city to finally eradicate illegal drugs through helping those afflicted by it find a way to turn their lives around.

With the police cutting the supply chain and the community helping the users give up drugs, COSAP hopes that Cebu City will soon be drug-free. /rcg

Read Next
HVI dies during buy-bust, P3.4M worth of ‘shabu’ seized in Lapu-Lapu