MANILA, Philippines — Majority of Filipinos believe it is “dangerous” to publish anything that is critical of the administration, even if it is the truth, the latest Social Weather Stations (SWS) survey showed. 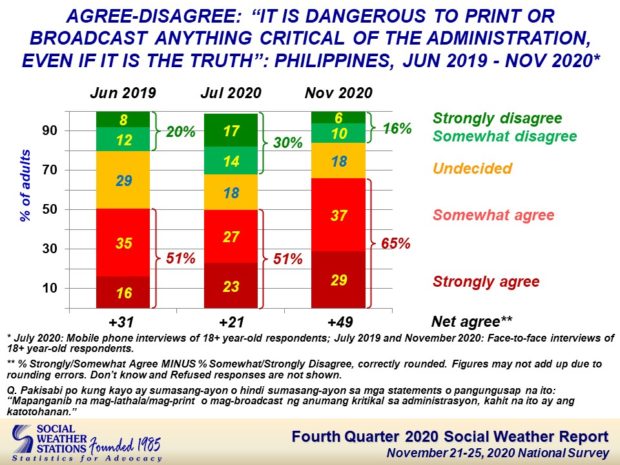 According to the fourth quarter 2020 survey published by SWS on Friday, 65 percent of adult Filipinos agreed with the statement, “It is dangerous to print or broadcast anything critical of the administration, even if it is the truth.”

Meanwhile, 18 percent said they are undecided, while 16 percent disagreed.

The net agreement with the dangers of publishing criticisms against the administration was the highest in Mindanao (+58), followed by the Visayas (+55), Balance Luzon (+47), and Metro Manila (+30).

The survey also found that 65 percent of Filipinos agreed with the statement, “I can say anything I want, openly and without fear, even if it is against the administration.”

Sixteen percent said they are undecided while 19 percent disagreed, giving a net agreement score of +46, which the survey likewise considers as strong.

According to SWS, in the six times that Filipinos were asked regarding their freedom of speech in the time of Rodrigo Duterte, the net agreement ranged from a moderate +23 to a strong +49.

The survey was conducted from November 21 to 25 in 2020 using face-to-face interviews of 1,500 adults nationwide. It has sampling error margins of ±2.5% for national percentages.