On the hard court or in a fire scene, Cebuano Dyll Roncal gives it his all 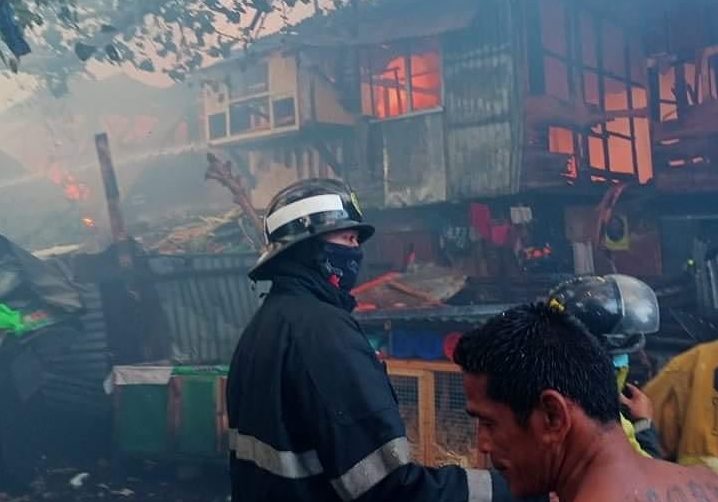 CEBU CITY, Philippines—Dyll Roncal is known to be a tough player on the hard court.

But not many know that this small forward, who is set to play for Kiboy’s Computer Specialist (KCS)- Cebu City in the Pilipinas VisMin Super Cup starting next month, is also a hard working fire volunteer.

Aside from being a basketball player, this 23-year-old Cebuano, who won a Cesafi title with the Southwestern University-Phinma (SWU) Cobras, is an active fire volunteer of the Barangay Sambag 2 Fire Brigade.

“One of my childhood dreams is to become a fireman and it happened that BFP held a training program last year and I was endorsed by our barangay captain Ryan Aznar. He encouraged me and my friend, Niño James Amante, who is a crew of our barangay’s ambulance team, to become a fire volunteer,” Roncal told CDN Digital.

Roncal was one of the responders in the fire in Barangay Sawang Calero on Wednesday, March 24, 2021.

“Every time we respond to a fire, for me it’s very fulfilling because we are there for people who are in dire need of help. For me, that’s one of the best achievements as a fire brigade volunteer.”

He said he has already responded to six fire alarms since joining the bureau in November 2020.

He officially joined Barangay Sambag 2’s fire brigade on November 9, 2020 after receiving his Certificate of Competency (COC), which is proof that he completed the necessary training to become a fire brigade volunteer.

According to Roncal, the adrenaline rush is  more intense in responding to a fire alarm.

“The adrenaline is more intense in fires than playing basketball because it’s a life and death situation,” said Roncal. “There are instances that I cannot go with the fire brigade because I’m in the middle of our basketball training, but I always find time to fulfill my duty.”

He added that the worst fire incident he and the Sambag 2 Fire Brigade responded to was the fire in Barangay Bulacao, Cebu City, last February, which destroyed an estimated 100 homes and killed one person.

Read: LOOK: The aftermath of the Bulacao fire

So how does Roncal balance his time?

“I do my workout in the morning and team practice in the afternoon. At night, I do my shift as a fire volunteer,” said Roncal.

However, starting next month, Roncal will be out of town as he and the Cebu City team will start their campaign in the Pilipinas VisMin Super Cup. The professional tournament will start April 9 in the southwestern Cebu town of Alcantara.

Still, Roncal is very thankful to his Sambag 2 Fire Brigade and Rescue team family for giving out their full support in his pro debut.