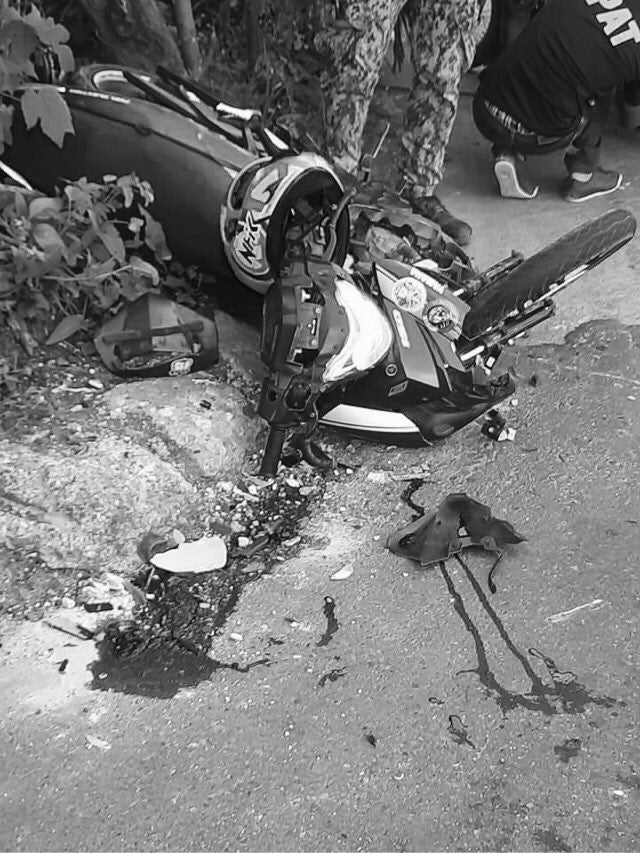 A motorcycle rider was killed in a road accident along the national highway in Barangay Dayhagon in Medellin town on Good Friday. | Photo from the Medellin Police Station

CEBU CITY, Philippines – Bemer Lindayao, 26, took advantage of the near empty roads in Medellin town on Good Friday for a motorcycle road test.

But he did not see the approaching tricycle driven by Porferio Titoy, 56.

The impact of the collision killed Lindayao while Titoy was also brought to provincial hospital in Bogo City for the treatment of his bruises.

(As a result of the impact, the driver was thrown off his motorcycle.)

Quoting the outcome of their initial investigation, Pepito said that Lindayao was driving on the left lane of the national highway in Barangay Dayhagon on Friday “at speed” from Medellin town on his way to the neighboring Bogo City.

Titoy, on the other hand, was traversing the highway’s right lane.  He came from Bogo City and was headed for Medellin town.  The tricycle driver was about to make a left turn at an intersection when his tricycle collided with Lindayao’s motorcycle.

Pepito said that Lindayao, a resident of Sitio Tacan in Barangay Ibo in Lapu-Lapu City, went on a Good Friday ride with other motorcycle riders.

They were already on their way home when Lindayao asked his co-riders if he could again travel the stretch of the national highway from their current location in Barangay Don Pedro in Bogo City to Medellin town and back to test the full speed of his motorcycle.

But he figured in a road accident as he was about to return to his colleagues who were waiting for him in Barangay Don Pedro.

Pepito said that the town’s emergency personnel brought Lindayao to the Bogo City Provincial Hospital, but he died before reaching the hospital.

Titoy, on the other hand, was treated for his bruises and is now under the custody of the Medellin police.  But he will still be made to undergo CT Scan to detect possible head injuries.

Pepito said they are still waiting for Lindayao’s family to visit the Medellin Police Station and decide if they will file charges against the tricycle driver or they would rather opt for a settlement. / dcb

Read Next
PAMALANDONG: A Virtual Visita Iglesia and Via Crucis