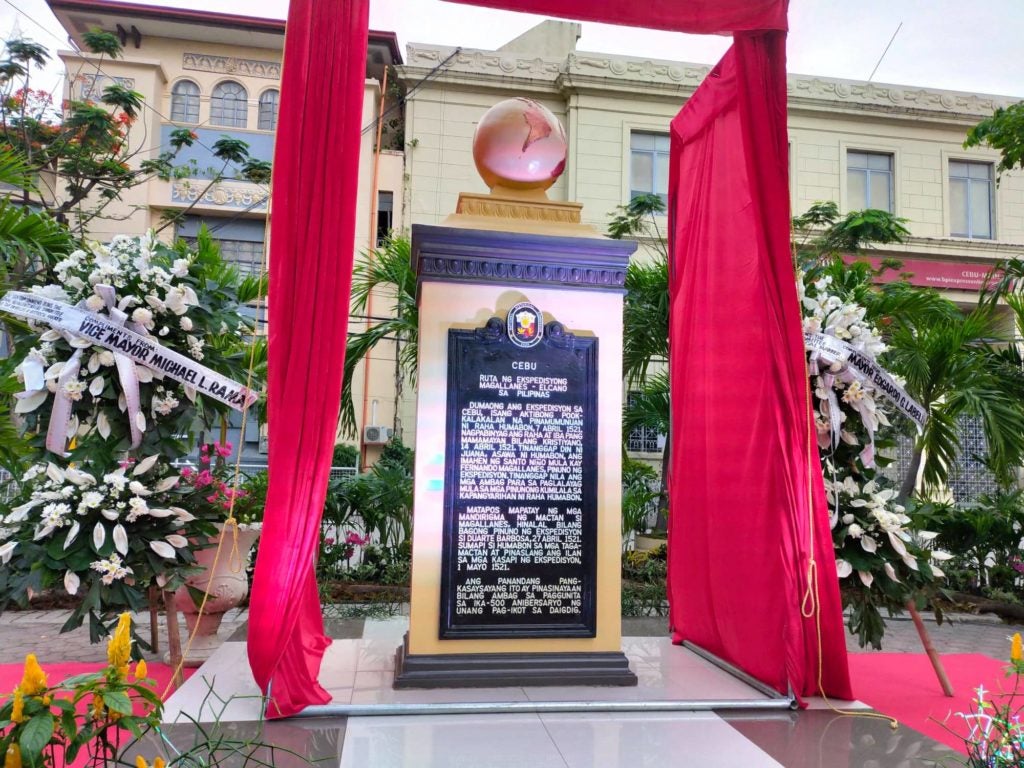 The Quincentennial Marker for the circumnavigation of the globe in Cebu City. | Delta Letigio

CEBU CITY, Philippines — The Quincentennial Marker that remembers the arrival of the Magellan-Elcano fleet 500 years ago has been unveiled in Cebu City on the 500th anniversary of the historical event.

Presidential Assistant to the Visayas, Secretary Michael Dino, said Filipinos have to remember the mighty King that welcomed Christianity into the archipelago.

Rajah Humabon of the Kingdom of Sugbo is historical proof that when the Spaniards arrived on the island, it was already a center of trade in Southeast Asia. The island’s destiny was changed forever with this arrival.

“When Magellan arrived in Cebu, it was already a trade center in South East Asia. Rajah Humabon welcomed Magellan just like any trader. Magellan realized that even Siam paid taxes to Cebu,” said Dino.

Dino said that based on Antonio Pigafetta’s historical account, we know that Cebu has always been a bustling city of trade much like it is now.

He added that Cebu has been destined for greater roles in entire Asia and has made its mark in the first circumnavigation of the earth.

This role is now being etched in stone as the National Quincentennial Committee (NQC) turned over the Quincentennial Marker of the circumnavigation erected at Plaza Sugbo to the Cebu City government.

The unveiling of the marker is part of the year-long Quincentennial celebrations in the country for the circumnavigation, the Battle of Mactan, and the arrival of Christianity in the country.

Cebu City Mayor Edgardo Labella accepted the custody of the marker from the NQC on behalf of the city.

He said Cebuanos take pride in their history as a powerful Kingdom in the prehispanic era to becoming the heart of Christianity in Asia.

Labella said the marker is a reminder of the rich history and heritage the city needs to protect and commemorate so the past will not be forgotten.

He also said the marker will be a reminder for the generations to come of how Cebu’s Queen Juana embraced the Christian faith that would become the religion of most modern Filipinos.

The marker was placed only a few meters away from the Magellan’s Cross which was believed to be the site of the first baptism.  /rcg

Read Next
Liquor ban should stay in Cebu City –DOH-7