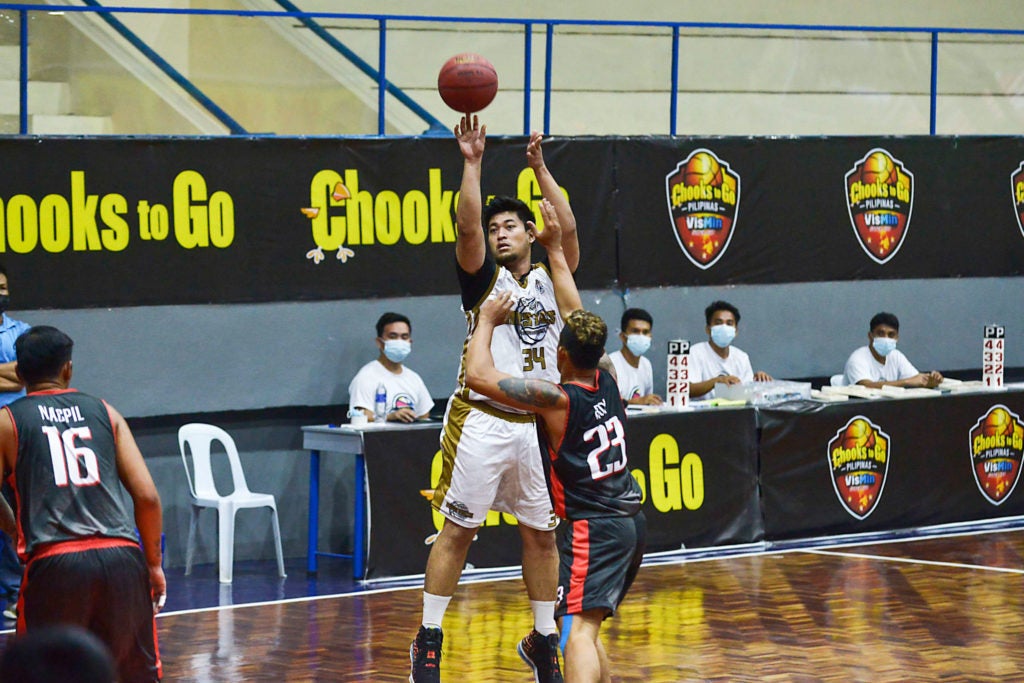 Ryan Buenafe of the Siquijor Mystics shoots from behind the 3-point arc against the Dumaguete City Warriors in the ongoing Pilipinas VisMin Super Cup. | Photo from the VisMin Cup media bureau

CEBU CITY, Philippines — After slacking off in their opening game, the Siquijor Mystics bounced back with authority following their come-from-behind win against the Dumaguete City Warriors, 105-100, in the ongoing Pilipinas VisMin Super Cup on Saturday night, April 10, 2021, at the Alcantara Civic Center in Alcantara town, southwestern Cebu.

The Mystics lost to KCS Mandaue City Computer Specialists in the tip-off last Friday, 46-66 but showed they have what it takes to go deeper into the tournament by scoring the biggest comeback performance in the league so far.

Desmore Alcober led the Mystics with a double-double performance of 22 points and 11 boards while dishing five assists, and snatching three steals.

Ryan Buenafe who was scoreless in his first game chipped in 24 markers, added six rebounds, six assists, and a steal.

It was a seesaw battle for both teams which resulted in four lead changes.

However, the Mystics doused the fire and took advantage of the Warriors’ stagnant offense to taste their first lead, 46-44, midway through the second period behind an emphatic 26-10 run.

The Warriors, however, were able to retake the lead after calling a timeout and sealed the first half with a 10-point bubble, 70-60. They maintained this double-digit advantage going into the fourth period.

The Mystics trimmed that deficit to just one, 94-95 behind an 8-0 run six of which were turned in by Miguel Castellano.

Alcober then intercepted a pass and converted it into a wide-open layup to give his team the lead, 96-95, with eight minutes left in the fourth quarter.

The Warriors managed to regain the lead momentarily after Mannie Gabas nailed a jumper, 97-96.

However, Ryan Buenafe completed a three-point play after getting fouled in the 3-point line for a, 99-97 Mystics lead. Buenafe then canned a three-pointer to give his team a, 102-97 cushion with five minutes left in the game.

Gene Belleza unloaded another 3-pointer to extend the Mystics’ lead to eight, 105-97.

James Regalado tried to keep the Warriors’ hopes alive with his own rainbow conversion that sliced their deficit to five, 100-105 as time ran out.

Regalado and Ronald Roy scored 18 apiece for the Warriors.