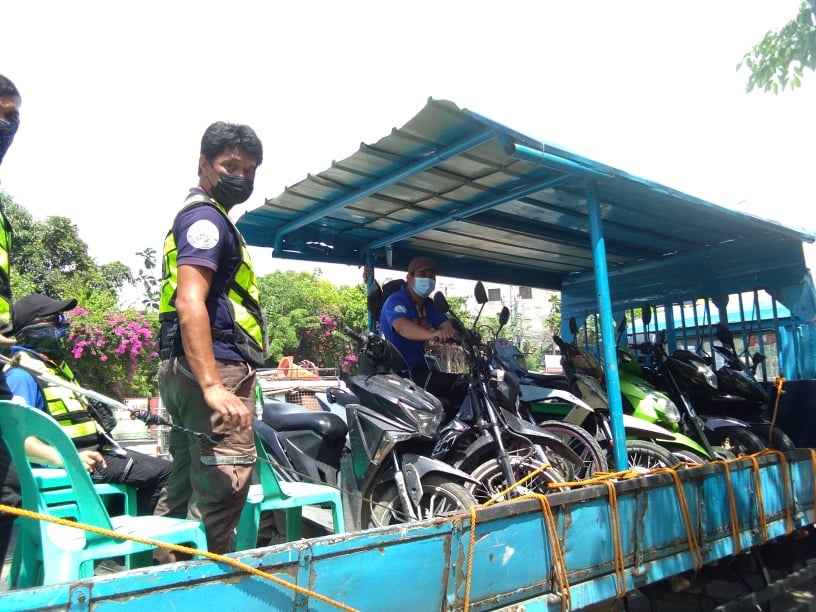 MANDAUE CITY, Philippines – Eleven motorcycles were impounded by the Traffic Enforcement Agency of Mandaue (TEAM) after their drivers failed to show the required documents such as a driver’s license or valid registrations.

This happened during a random inspection conducted along A.C Cortes Avenu by TEAM personnel in coordination with the Highway Patrol Group from the Police Regional Office-7 and the Traffic Management Unit on Thursday morning, April 22, 2021.

Joseph Oliver Wenceslao, Mobile Operations Section Officer, said most of the drivers of the impounded motorcycles were without a driver’s license, not carrying registration papers, and having expired registrations.

Wenceslao said drivers can claim their motorcycles once they pay their penalties and renew their registrations.

Wenceslao also said that so far, a few Traditional Public Utility Jeepneys coming from Lapu-Lapu have complete documents to resume operations in the city.

Yesterday, April 21, during their inspection in barangay Jagobiao where jeepneys with Liloan-Consolacion-Mandaue route would pass through, they have issued citation tickets to 14 TPUJ drivers and impounded their units for having incomplete documents needed to resume operations.

Edwin Jumao-as, TEAM head, said most of the drivers have no RT-PCR swab test and special permit to operate from the Land Transportation Franchising and Regulatory Board (LTFRB).

Wenceslao said they strengthened their inspection due to traffic accidents involving motorists that have no valid documents and also to make sure that TPUJs follow the standard health protocols. /rcg

Read Next
Teachers, school personnel who are seniors, with comorbidities may already get vaccine jabs — DepEd