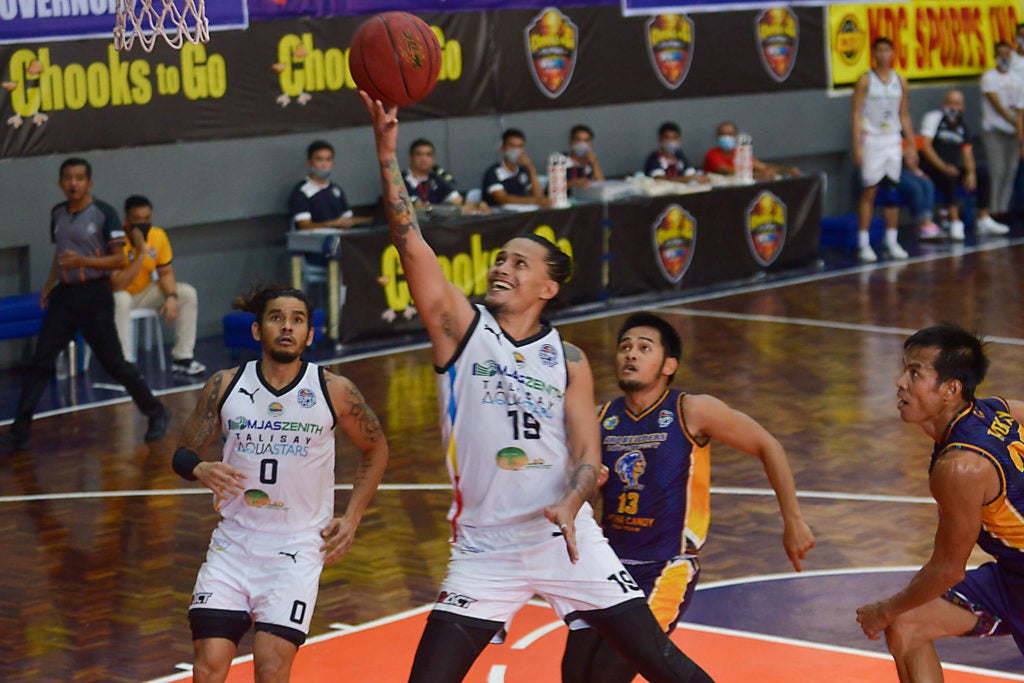 Patrick Jan Cabahug of the MJAS Zenith Talisay goes up for a layup during their game against the ARQ Builders Lapu-Lapu in the Pilipinas VisMin Super Cup. | Photo from VisMin Cup Media Bureau

The Aquastars’ league-leading record of 10-0 earned them an automatic ticket to the best-of-three finals of the fledgling leg.

This also meant that the rest of the field would have to play in a stepladder format to determine who will earn the coveted finals spot against the Aquastars.

In this format, the second seed would advance to the semifinals where it will have a twice-to-beat advantage. Currently, the KCS Computer Specialists Mandaue City owns the enviable spot.

The four other teams from third to sixth will play in crossover knockout games to determine which of them will go up against the Specialists in the semis.

The Aquastars rode on the red-hot shooting of Patrick Cabahug in the first period, where the latter drained nine of his 22 markers, helping the team establish a 24-9 lead.

From there, it was all Talisay City as Lapu-Lapu struggled to buy a basket and could not get closer by less than a dozen points.

Talisay City closed out the game in dominant fashion, outscoring Lapu-Lapu, 30-11, in the fourth period, highlighted by a pair of slam dunks from the high-leaping Jaymar Gimpayan.

Darrell Shane Menina came off the bench and tallied 11 points, four boards, four dimes, and two steals while big man Allan Santos missed out on a double-double with 10 points and nine rebounds.

The Aquastars’ skipper Paulo Hubalde orchestrated Talisay City’s offense to perfection by dishing out 13 assists on top of six points and seven boards.

The Heroes struggled mightily from the field, shooting just 31-percent including a paltry 4-of-22 from beyond the arc. The loss dropped them to 4-5 with just one more game left on their schedule.

Rendell Senining, who returned from a six-game suspension, had four points and four assists in 20 minutes of game time.

ARQ faces Tubigon Bohol for its final elimination round assignment tomorrow at 7 p.m.