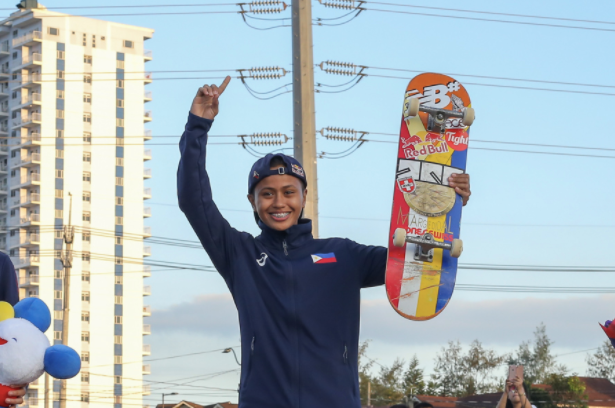 CEBU CITY, Philippines — Cebu’s skateboarding pride, Margielyn Didal, may not have qualified in the final round of the women’s category of the World Street Skateboarding Championships 2021 in Rome, Italy, but she earned her first Olympics berth.

The 2018 Asian Games gold medalist finished 17th overall in the women’s semifinals of the prestigious skateboarding Olympic qualifying tournament with a total of 8.04 accumulated points.

Her 17th place finish in the world championships helped her maintain her rank in the world rankings at 13th place. It was enough to make her qualify for the Olympics which selects the worlds top 16 skaters.

From ninth place before the semifinals, Didal catapulted herself to the No. 2 spot impressively scoring 3.49 points in the run section. She finished the second heat with 6.40 points to momentarily grab the No. 2 spot.

The pride of Barangay Lahug, this city gracefully executed crucial tricks such as nose grind, kick flips, feeble grind, and a 360-flip in her one minute routine.

However, Didal only managed to nail a single trick in the best trick attempt which resulted to her 17th place finish.

Meanwhile, Leal Rayssa of Brazil headed to the finals of the World Street Skateboarding Championships 2021 being at the top spot with 14.40 total points followed by Japan’s Aori Nishimura with 14.24 while fellow Japanese Funa  Nakayama is at third with 13.88 points.

Your subscription could not be saved. Please try again.
Your subscription has been successful.
Read Next
Cebu schools support bill amending new 25% tax policy on proprietary educational institutions