Lapida maker killed for failing to deliver headstone on time 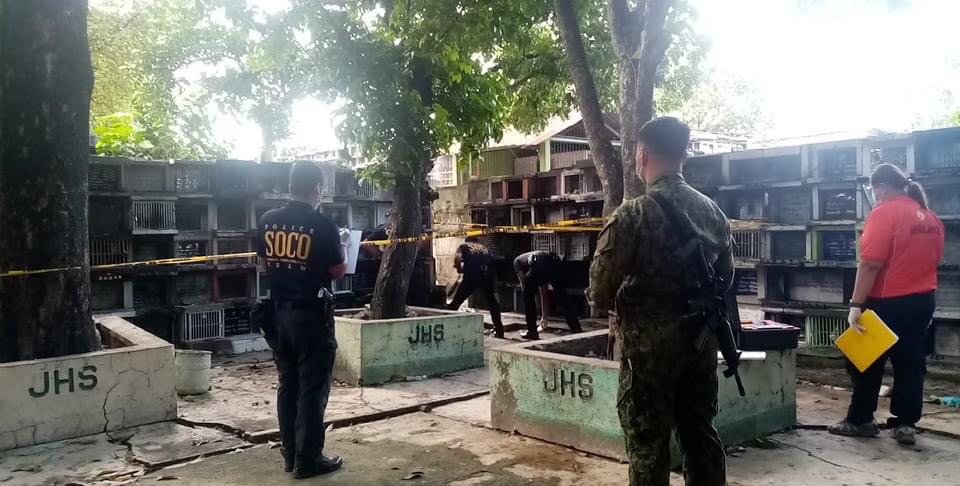 Scene of the Crime Operatives (SOCO) process the crime scene where a lapida maker was shot dead inside the Calamba Cemtery in Barangay Calamba, Cebu City this morning, June 7. | Paul Lauro

CEBU CITY, Philippines — A 30-year-old lapida maker or headstone maker was believed to have been killed because he failed to finish an already paid lapida or headstone on time.

Witnesses told police that this was probably the cause of the argument between the lapida maker, Carl Eric Garces, and his unsatisfied customer identified only as a certain “Eddie Boy”, which led to the fatal shooting of the former inside the Carreta Cemetery at past 6 a.m. today, June 7.

(We already have a suspect, but he escaped right after our hot pursuit operation. In fact, he was there at the area near the crime scene but he managed to escape the police. We have a suspect identified as a certain “Eddie Boy” but we still don’t have his address.)

Witnesses said that that “Eddie Boy” had allegedly paid Garces to make a headstone or lapida and finish it on June 6.

But Garces of Sitio Mahayahay 1 in Barangay Calamba, Cebu City was not able to keep his end of the bargain and this allegedly angered “Eddie Boy”, and the two then started arguing, said Regidor.

At the height of their argument, Regidor said, that the “Eddie Boy” allegedly pulled out a .45 caliber pistol and allegedly shot Garces several times in the head and body.

Regidor said with this they believed that the motive of the killing was a personal grudge.

He also said that they were continuing to investigate the killing and pursuing the suspect, who remained at large.